There’s no pretense of neutrality with these partisan hacks — not even when reporting a tragic accident that killed a Congresswoman, two of her staffers, and the woman driving the other car.

On Wednesday afternoon, the horrible news that 58-year-old Congresswoman Jackie Walorski (R-IN) and two of her staffers, Zachery Potts, 27, and Emma Thomson, 28, died in a head-on collision. The sole occupant of the other vehicle, Edith Schmucker, 56, was pronounced dead at the scene.

The accident occurred on SR 19 south of SR 119 when Shmucker’s vehicle going northbound crossed the center line and collided with the southbound SUV that Rep. Walorski and her two young staffers were traveling in.

Four people died in a tragic accident, but that’s not going to stop WaPo from running something truly grotesque about Rep. Walorski simply because she has an “R” after her name.

From his bio, you can see that he’s a bit more interested in politics than most.

Eugene Scott is a national political reporter on The Post’s breaking news team. He previously wrote about identity politics for The Fix. And he also hosted “The Next Four Years” podcast available exclusively on Amazon Music. Scott was recently a fellow at the Georgetown University Institute of Politics. And prior to joining the Post, Scott was a Washington correspondent at CNN Politics.
Source: Washington Post

His Twitter bio declares that “all politics is identity politics.” 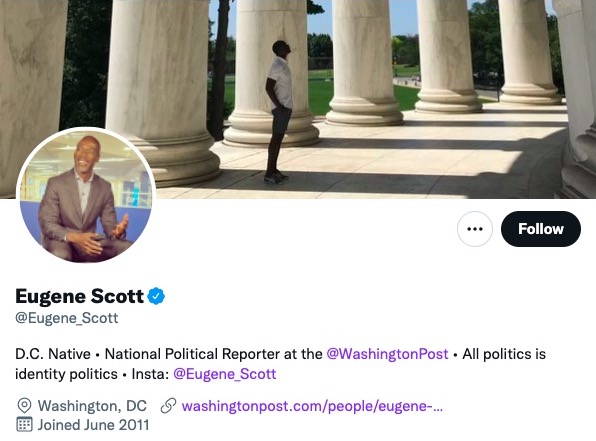 He is also very keenly aware of the way articles are crafted. 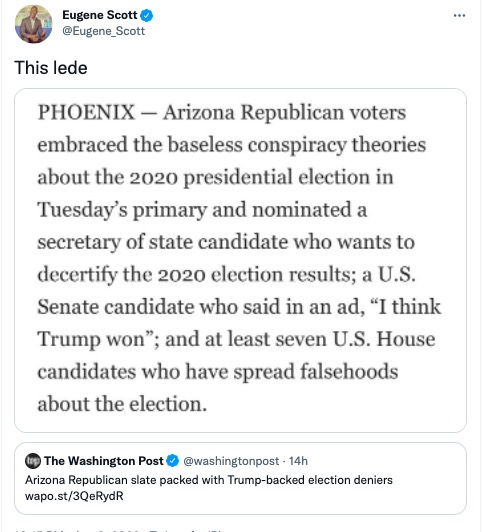 This was supposed to be a neutral report of a head-on collision that killed four people including a Member of Congress, but the partisan Scott just couldn’t help but take a couple of jabs at the recently deceased.

The “breaking news” report originally ended with this as the last paragraph:

In the event of a Republican takeover of the House after the November midterm elections, she would have been on track to chair the Ways and Means worker and family support subcommittee. Walorski voted against certifying President Biden’s victories in both Arizona and Pennsylvania after the Jan. 6 attacks on the U.S. Capitol that left more than 100 law enforcement officers injured.
Source: Washington Post (archived)

The comments to the tweet were pretty clear — Eugene Scott should be ashamed of himself for including that in the article.

Decreasing compassion one article at a time

Our standards were low already but holy crap

You should be ashamed of the final line of this piece. You lament rank partisanship and hatred, you complain that “democracy dies in darkness” and yet you conclude a piece such as this with a disgusting display of not only partisanship but inhumanity.

No respectable publication would print such a bigoted, mean spirited story about a woman & staff tragically killed in an accident.
At minimum, the story should be retracted, an apology issued to the family & @Eugene_Scott suspended.

Her family should sue! I mean, look at this vitriol, this hatred! pic.twitter.com/92HJMcfKUx

This is one of the most hateful, disrespectful, vengeful diatribes I have ever read in an American newspaper. I hope the Post suspends this awful man.

@Eugene_Scott WTH is wrong with you?! Disgusting article full of lies. A US Rep lost her life and you thought it was a good idea to use her death to regurgitate Jan. 6 leftist nonsense?!

Of course, in order to be ashamed, one has to have the capacity for shame.

From what followed, it appears that Scott lacks that capacity.

After criticism online, Scott doubled down by expanding the politicization of the piece.

In the event of a Republican takeover of the House after the November midterm elections, Walorski would have been on track to chair the Ways and Means worker and family support subcommittee. Walorski, an evangelical Christian, was known for her conservative stances on social issues.

Earlier this month, she opposed the Women’s Health Protection Act and the Ensuring Access to Abortion Act, calling Democrats’ stance on abortion “dangerous” and “extreme.”

“At Speaker Pelosi’s urging, House Democrats once again voted to greenlight abortion at any time in pregnancy, anywhere in the country, and bankrolled by American taxpayers,” Walorski said in a statement. “Abortion on demand is a direct affront to pro-life values and Americans’ conscience rights.”

A Donald Trump supporter, Walorski voted against impeaching the president in 2021 for his role in the Jan. 6 attack on the Capitol, which resulted in the deaths of one police officer and four others and injured more than 100 law enforcement officers. She also voted against confirming Democrat Joe Biden’s victories in Arizona and Pennsylvania in the 2020 presidential election.
Source: Washington Post

It’s like he had a checklist of all the leftist attacks against Republicans and shoved them into a report about her death.

The cherry on top of this giant pile of crap is the repeated lies about the Capitol Riot — no police officers died on Jan. 6 as a result of that riot. Officer Brian Sicknick died of natural causes and his mother was the one that clarified that.

This “dancing on the grave” report comes after Vox senior correspondent, Ian Millhiser, who covers the Supreme Court, pre-wrote an obituary for Justice Samuel Alito which he posted on Twitter before quickly deleting it.

He wrote, “It is considered to be quite gauche to speak ill of the recently deceased. So, if you are a person who is easily offended by breaches of etiquette, you probably want to stop reading this piece right now.”

(Scott should’ve posted a similar warning in his piece.)

Millhiser goes on, “Justice Samuel Alito, who died on XXXX, was not devoid of any positive traits. He was an attorney and a highly effective advocate for conservative causes. He had spent time as a litigator, he would almost certainly be remembered as one of the Republican’s leading Supreme Court practitioners.”

“The problem is that Justice Alito was, indeed, one of the Republican Party’s leading Supreme Court advocates — but he embraced this role while he was a sitting justice,” he concluded. 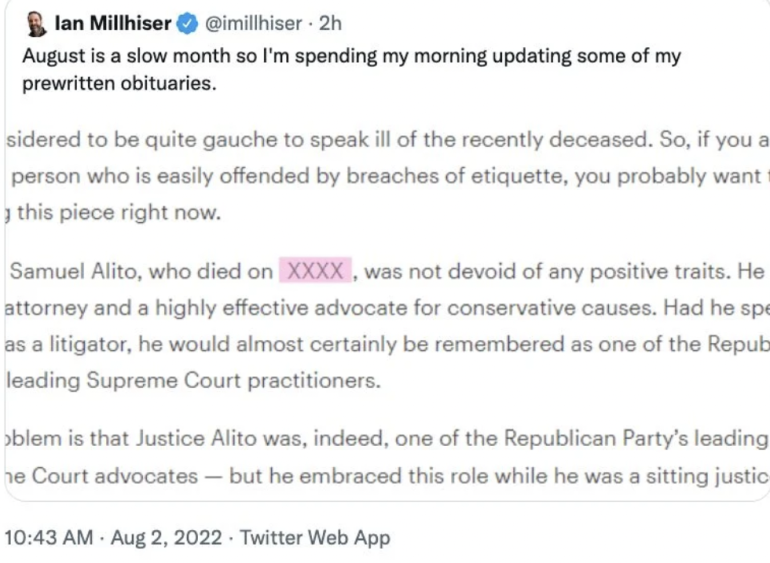 These are the same people that lecture us about “decency and civility” and it was so awful that Trump would post “mean tweets.”

Speaking of “mean tweets” — here’s how the Bad Orange Man responded to the death of Justice Ruth Bader Ginsburg.

A few moments ago, a reporter told President Donald Trump about the death of #RGB. Hear his remarks. https://t.co/svp5e3xE2f pic.twitter.com/YdP4Og9fPj

That amazing moment of surprise and compassion couldn’t have been scripted any better.

How much do you want to bet that Eugene Scott and Ian Millhiser think that they’re morally superior to Donald J. Trump?

Eugene Scott is taking sadistic pleasure in dancing on the grave of a Congresswoman because he didn’t agree with her politics.

Ian Millhiser is doing it even before Justice Alito has died… and it’s coming after months of threats and harassment against Supreme Court Justices including a guy admitting he was going to kill Justice Kavanaugh along with other Justices.

Only extremely callous, vindictive, and petty individuals would dare to do such things.

But then, they are lefty journos. We shouldn’t be surprised that they’re soulless ghouls.