Knowing she would be unable to claim any actual victory, Cheney has chosen to frame this as a ‘moral’ victory. Naturally, she invoked ‘Democracy’.

Even Liz Cheney could read the writing on the wall. That’s why she saved so much of her campaign money for … her NEXT political adventure. (*cough* 2024 *cough*)

Having long since thrown in with the sleaziest of establishment leftists like Adam Schiff, any claim of taking the moral high road obviously rings hollow. But having no other cards left to play she’s going to do it anyway.

She knew she was going to lose this race. The only question was could she make it close? We’ll let this graphic speak for itself. 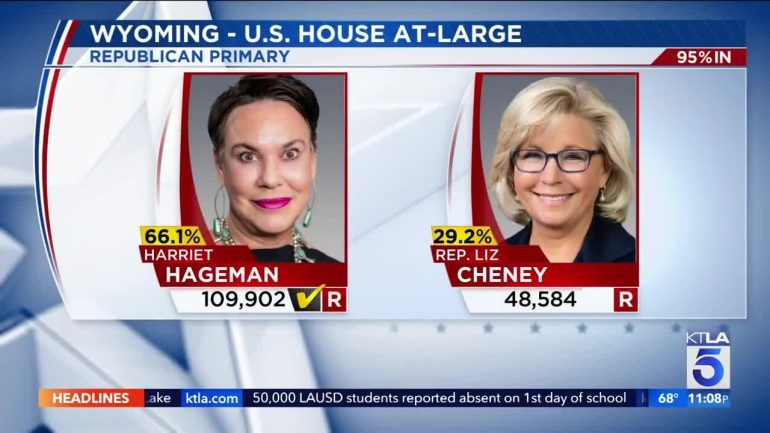 But Liz thinks her loss is not only a win, but it is the kind of win that puts her in some very elite company.

“Abraham Lincoln was defeated in elections for the Senate and the House before he won the most important election of all,” said Cheney. “Lincoln ultimately prevailed, he saved our union and he defined our obligation as Americans for all of history. Speaking at Gettysburg of the great task remaining before us, Lincoln said, ‘That we here highly resolve that these dead shall not have died in vain.'”
“‘That this nation, under God, shall have a new birth of freedom and a government of the people by the people and for the people shall not perish from this earth,'” she continued. “As we meet here tonight, that remains our greatest and most important task.” –Newsweek

Has she even seen herself in a mirror these last few years? The closest she comes to Lincoln is ‘The Lincoln Project.’ Not surprisingly, she’s already working on a grift just like theirs…minus those sexual misconduct allegations.

Immediately following her loss to Harriet Hageman in Wyoming’s Republican primary, Rep. Liz Cheney, R-Wyo., unveiled her next move, launching a new organization with the primary goal of keeping former President Donald Trump from regaining the presidency.
The group, called The Great Task, gets its name from a phrase in the Gettysburg Address, and Cheney invoked President Abraham Lincoln in calling for the Republican Party to go back to its roots.
“We’ve to get this party back to the principles and values on which it was founded,” Cheney said in an interview with NBC’s “Today Show” Wednesday morning, claiming that it has lost its way in focusing too much on Trump and his “cult of personality.” –FoxNews

Not content to have been a carpetbagger from Virginia trying to pick up an easy win in ‘representing’ Wyoming, she has evolved from that into a different kind of political parasite… one whose entire identity is wrapped up in Trump.

It’s always interesting to see how weak people ride the accomplishments and reputation of people more significant than themselves, either as toadies riding their coattails or as ‘resisters’ using them as a foil.

The daughter of War Criminal Darth Vader (did he ever find those WMDs?) is suddenly a darling of the left because she has embraced their boogeyman and joined them in the fight.

Aside from the obvious Lincoln Project comparison, the only thing she and Lincoln REALLY have in common is their history of playing fast and loose with American citizens’ constitutional rights.

Abe could point to the Civil War as the excuse for why he ignored certain inconvenient Constitutional rights. Even then, he is STILL given a rough ride for it by some students of history.

But Cheney doesn’t have that excuse. She sat in leadership on a group comprised solely of people who had already convicted the accused of a crime, a group that blurred the lines of criminal and civil prosecution, behaving as judge, jury and executioner. She (deliberately and knowingly) turned her back on America’s core principles of justice, inclding the presumption of innocence and burden of proof.

She ran an Inquisition, not an inquiry.

It was an Inquisition that offered the accused no right to challenge his accusor, that rejected 4th Amendment defenses, that ignored the protections offered to privileged documents, and which almost certainly served as a workaround for AG Garland to gain access to information the Constitution forbade him access to because of 4th Amendment restrictions?

Go ahead and bask in that approval of gutter-crawling swamp creatures, Liz.

Call yourself a hero if you want to.

We all know the truth.