The Centers for Disease Control and Prevention quietly updated the information on mRNA vaccines by removing the portion that says that the spike protein does not remain for very long in the body.

The edit on the website was done sometime in July and was recently discovered by Dr. Ray Armat.

The portion that was removed reads:

The mRNA and the spike protein do not last long in the body.

Rep. Thomas Massie (R-KY) posted a screenshot of what was removed to his 438K followers.

.@CDCgov is quietly deleting misleading information from their website

The following statement was removed from their website between July 16th and July 22nd:

“The mRNA and the spike protein do not last long in the body.”

Here is the original tweet by Dr. Armat with screenshots of what the website used to say and what it says now.

In July 2022, The CDC quietly updated what they learned about mRNA (albeit in a tacit/underhanded way) by REMOVING claims about spike & #mRNA code NOT lasting in the body & NOT interacting with DNA
See January statement (yellow highlights, Removed)
Source:https://t.co/AqAjEUHEik pic.twitter.com/zVroF8K4w8

Here is a side-by-side of the archive from July 21 and the current wording on the website. 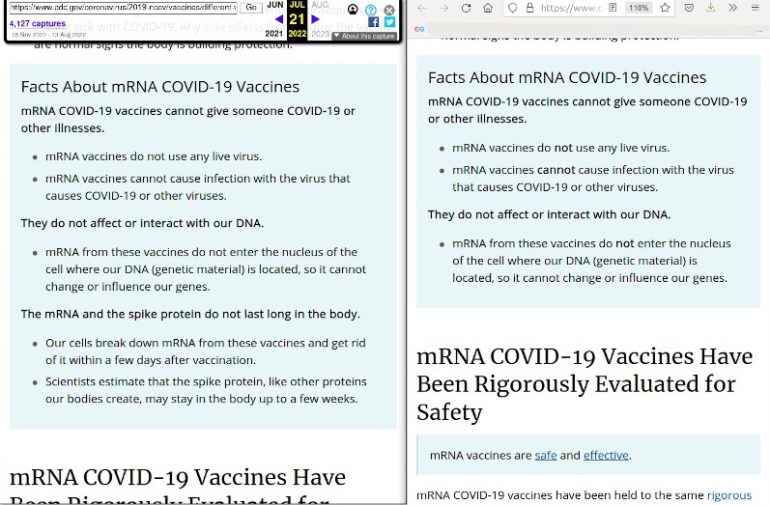 Back in May 2021, Dr. Byram Bridle, a Canadian immunology professor, warned about the possible long-term effects of mRNA shots on children. In a radio interview, he cited a Japanese study that showed that the spike protein didn’t stay at the injection site in the deltoid muscle, but travels throughout the body and can be found accumulating in several tissues including the spleen, the bone marrow, the liver, the adrenal glands, and the ovaries.

Despite that, mass vaccination of children over the age of 5 continued.

In June, CDC Director Rochelle Walensky grinned as she announced the approval of mRNA jabs for kids 6 months to age 5.

Now we’ve learned that the CDC just removed the section about mRNA jabs that says that the spike protein doesn’t stay in the body for between a few days and a couple of weeks.

Is that an admission that the spike protein stays in the body longer than scientists thought?

If that’s the case, did they know that before or after they approved the shots for tots?

Don’t hold your breath on getting any answers.

The way that this pandemic has been handled from Day 1 has been atrocious. Public health agencies have destroyed their credibility and it doesn’t look like they’re willing to take the “L” and admit that they were wrong about anything.