Dozens of FBI, armed with carbines, as though they were expecting armed resistance, went room-by-room through the President’s Mar-A-Lago home while the 45th President was in another state.

The judge who approved the warrant served as an attorney for Jeffrey Epstein while he was in private practice… but don’t question his integrity.

Authorities had already visited his home in the past and looked at the same documents that are supposedly at the heart of this issue.

Contrast this to the handling of Hillary’s dealings with authorities. When Hillary claimed she was hacked by Russians, the FBI never took her computer into custody. In fact, they relied on the say-so of a 3rd party to confirm the alleged hack. And when she was busted with classified files on an insecure computer, her home was not raided, nor was her information seized. Her lawyers were permitted to go through and remove any email deemed to be ‘personal’ in nature… and she deleted thousands of emails AFTER they were subpoenaed. Or have we so soon forgotten the term ‘bleachbit’?

We even know through the Strzok text exchanges that the FBI had predetermined Hillary’s innocence on the email question even BEFORE Hillary was interviewed.

The same FBI that threw the book at Manafort over his dealings in Ukraine let his partner Tony Podesta off Scott-free and granted IMMUNITY. Tony Podesta just ‘happened’ to be the brother of Hillary’s Campaign staffer. What a marvelous coincidence.

Trump’s political allies are routinely given strong shows of force by federal law enforcement. Manafort, Roger Stone are obvious examples. Meanwhile, FBI agents who have abused their authority to target (for example) Trump or (in the case of General Flynn) falsified evidence against him got slaps on the wrist and sometimes the reinstatement of their pension.

But we are also seeing disturbing examples of the FBI being little more than the enforcement arm of Joe Biden’s Democrats. We need look no further than the ACLU’s outrage over the FBI’s abuse of First Amendment Protections over how the FBI Project Veritas reporters. Not only did they seize journalists’ electronics, and leak their full contents to the NYT (with whom PV had a pending lawsuit), but they deliberately misled a judge about the nature and scope of the activities and actions they had taken against Project Veritas.

In sharp contrast to Hillary’s bathroom-based server, Mar-A-Lago actually has a proper room (SCIF) in which top-secret information can be securely handled.

Why would we need an armed, pre-dawn raid for Trump over information Trump knew since at least January that someone in the current administration wanted from him? Would they suddenly be afraind he would destroy key information that had been sitting quietly in his home for months?

This has all the appearance of using a shotgun as a flyswatter. The real question is why they did it this way.

Why didn’t they go through the same polite channels they used with Democrats like Hillary Clinton, unless their use of power was itself the message both to the public and the people they investigated. 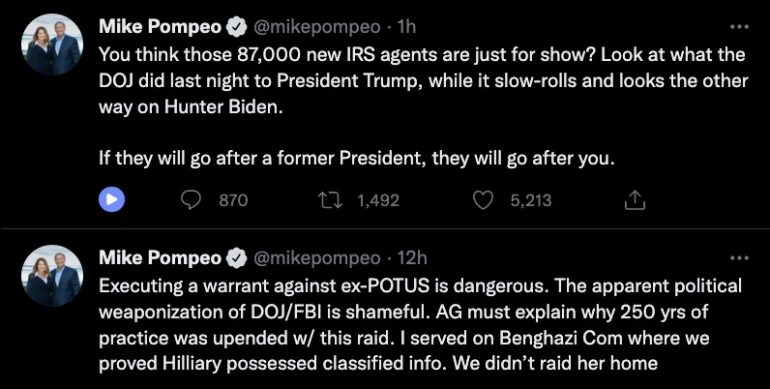 Meanwhile, just last Friday, with respect to the latest Hunter Biden revelations of CCP meetings with Joe in the White House, no less than AG Barr has been calling for an Independant Council.