Some countries are pumping the brakes on “gender-affirmation” medical interventions for teens, but hospitals in North America are hitting the gas.

Sweden and Finland have stopped the use of puberty blockers and hormones for people under age 18 and the United Kingdom is examining what was happening at their youth gender clinic that appears to have pushed the affirmation model too far and began the medical transition of gender confused teens who had underlying issues like autism or mental illness without addressing those issues.

The 40-second video explains that a hysterectomy involves the removal of the uterus, cervix, and fallopian tubes, but removal of the ovaries is a separate surgery. She is saying this while discussing using surgery to “affirm” someone’s gender identity.

“A gender-affirming hysterectomy is very similar to most hysterectomies that occur,” said Dr. Frances Grimstad of Boston Children’s Division of Gynecology cheerily in the video. “A hysterectomy itself is the removal of the uterus, the cervix — which is the opening of the uterus — and the fallopian tubes, which are attached to the sides of the uterus.”

“Gender-affirming hysterectomies” promoted by Boston Children’s Hospital.
Women who undergo hysterectomies have an increased risk of early onset dementia by 133%.
This risk increases the younger a woman or girl is at the time of the surgery. pic.twitter.com/OJnlYHYxOi

Understand what’s happening here — these are healthy organs that are being removed in young people because of a neo-Gnostic belief that their essence is their “true self” and it does not conform to their physical reality, therefore elective surgery is necessary to make the outward match the inward.

It is only with our current modern medical interventions that this sort of thing is possible. But… this is being discussed at a children’s hospital and the ripple effects of these interventions are still not fully known.

As the Twitter account Women’s Voices notes, there is a study that shows that estrogen likely plays a role in early onset dementia, and having an early hysterectomy increases this risk. The study doesn’t include the risk of women under the age of 20.

Women’s Voices then shared the link to a 2012 a study titled “Hysterectomy, Oophorectomy, Estrogen, and the Risk of Dementia” published on the National Institute of Health website that backs up this claim.

Women who underwent a complete hysterectomy with removal of both ovaries had an increased risk of early onset dementia by 133%.

“The risk increased with younger age at the time of the surgery… Estrogen deficiency appears to play a key role.”https://t.co/d1fsBgrSXG 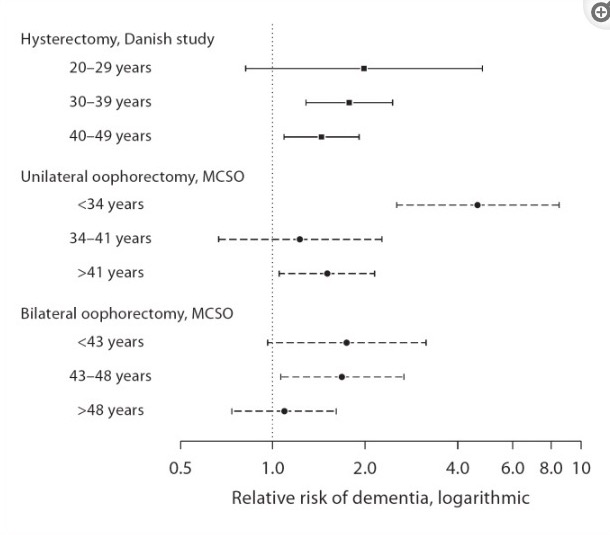 At the time of writing this article, the videos with Dr. Grimstad were being hidden away. The entire playlist about “gender affirmative care” had gone private along with the individual videos of Dr. Grimstad.

One video by Dr. Grimstad explained that the patients that are eligible for “gender-affirming hysterectomies” and oophorectomies are over the age of majority, and a second explained that retaining ovaries would allow trans patients to rely on a “natural” source of sex hormones in case access to testosterone wasn’t available.

Here are the links in case they decide to make them public again.

While Dr. Grimstad can insist that the patients are over the age of majority for these procedures, her colleague, at Boston Children’s Hospital says that girls as young as 15 can have their healthy breasts surgically removed and boys age 15 can get breast implants, and they don’t necessarily have to be on hormones for over a year.

Some medical professionals, however, have admitted that girls as young as 12 have had healthy breasts removed.

Kellyn Lakhardt, gender specialist at Kaiser Permanente in Oakland, California admits they have cut off the breasts of a 12-year-old girl for gender purposes.

Still, these are children between the ages of 15 to 18 years old making these life-altering decisions that include the surgical removal of healthy body parts seems like a bad idea, especially when historically, the vast majority of children will “outgrow” their gender dysphoria once they hit puberty.

With that background, many people — especially parents — are wondering what the scientific and medical evidence is for “gender-affirming” interventions, but a number of gender activists claim that even asking these questions is based in bigotry, not what is best for these gender-confused kids.

These days, the “medical consensus” seems to be to delay puberty through the use of chemical castration drugs and then offer cross-sex hormones and surgery. This is called “gender-affirmative care” — an Orwellian term if there ever was one since it means “affirming” the perceived gender rather than the biological reality.

Boston Children’s Hopsital offers a slew of “gender-affirming” surgeries and although they say that they use guidelines created by the World Professional Association for Transgender Health (WPATH), they don’t disclose that every single member of WPATH’s committee that outlined what standards of care should look like for trans patients have significant conflicts of interest. (Lisa MacRichards at “Canadian Gender Report” provides evidence of this in her article titled, “Bias, not evidence dominates WPATH transgender standard of care.”)

There is no medical consensus on this — gender activists are bullying the opposition. Fortunately, there are some fearless medical professionals willing to take a stand.

That’s because there are some pretty big problems that are now showing up with these medical interventions.

To many, the gender stuff and trans kids came out of nowhere a few years ago and has quickly dominated the national conversation.

That’s probably because some people are making a whole lot of money on this new Gender industry.

One thing that people aren’t really discussing is why this is suddenly happening at an increasingly rapid rate now and the percentage of kids that have other issues in addition to gender dysphoria.

There’s also the push by True Believer teachers in early childhood education to insert this pseudo-religious ideology into classrooms.

The concern here is real — kids are making life-altering decisions and getting surgeries to alter their bodies to conform to what they think it is right now without deep consideration of the future implications and the medical community is going along with it because either they (a) agree and see this as a lucrative new patient demographic, or (b) are afraid to speak out lest they enrage the radical gender activists. Either way, that’s a bad thing for evidence-based medicine.