Does Joe Biden even have the memory of a goldfish?

Not so long ago, when someone really sucked at remembering things, we used to say they had the memory ‘of a goldfish’.

It even made fodder for one of the early episodes of Mythbusters, which was summarized this way on the Mythbusters fandom site:

The Myth – A goldfish’s memory lasts only three seconds.
Verdict – Busted
Note – Jamie trained his goldfish to recognize color patterns and complete an obstacle course under water. They remembered what Jamie had taught them over a month later and easily completed the same course without Jamie’s prompting. However, Adam’s fish suffered from a filter malfunction and they were not getting enough food.

So a goldfish has a memory of MORE than 3 seconds.

What about the memory of a sitting President in control of the proverbial nuclear football and negotiating high-stakes deals with foreign powers? How long is HIS memory?

Here’s a video clip of an event where Joe Biden is with some other key Democrats in celebrating the latest irresponsible legislation they have been signing into law.

Being President, Schumer shakes Biden’s hand first, then moves to Joe’s right, shakes another hand, moves across to Joe’s left and shakes the remaining two hands.

Watch carefully at the Sock Puppet-In-Chief’s befuddled reaction when Schumer skips Biden (whose hand he had already shaken) on his way to shake the two remaining hands:

While we can’t use the Mythbusters video we referenced, here’s another video explaining an experiment that shows us goldfish memory is a lot longer than we might think…

So to recap, goldfish can remember things for as long as six months…

While the Shambling Husk of Mediocrity in the Oval Office can’t even hold a thought in his head for the whole duration of this ten-second clip.

The left and media [apologies for the redundancy] mocked Trump when he called himself a ‘stable genius’ after having a perfect score on the cognitive test –a result that many of his critics were unable to duplicate.

At this point we’d almost be relieved to learn Joe Biden is able to correctly complete a much simpler test of cognitive decline, drawing the face of a clock.

By now, we wouldn’t be at all surprised if it looked like one of these: 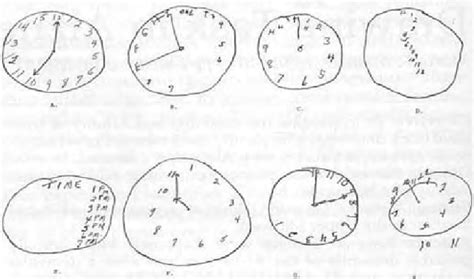 The left loved to scream ’25th Amendment’ all day long when Trump was in office. At a minimum, can we at least get the White House doctor to take a look at some of Joe’s cognative check engine lights?

This is getting ridiculous.