The teen who was out on early release for attempted murder smiled in his mugshot after killing 4 and injuring 3 others.

Ezekiel Kelly, 19, of Memphis, Tennessee, was captured after a police chase that resulted in the wreck of the grey SUV with Arkansas plates that he stole.

The entire series of events looked like something from the video game “Grand Theft Auto.”

It’s been a rough week for the residents of Memphis.

Earlier this week, the body of Eliza Fletcher, a mother-of-two, teacher, and heiress, by an ex-con who served 20 years for a previous abduction.

Then, on Wednesday evening, Memphis police warned residents that a man was at large shooting people at random and posting the videos of his rampage on Facebook live.

Memphis PD identified the suspect as 19-year-old Ezekiel Kelly who was, shall we say, “known to police.”

Kelly has a violent criminal record, and police have linked him to eight different incidents, including a June 2020 arrest for attempted first-degree murder, reckless endangerment, using a gun during a felony, and aggravated assault.

#NEW: the 19-year-old active shooter suspect Ezekiel Kelly has an active warrant due 1st Degree Murder. He’s being taken to a nearby fire station to be checked out. pic.twitter.com/9DrL14peb6

The city was put on lockdown as police searched for Kelly.

Kelly shot and killed four people and wounded three between approximately 1 am and 8:55 pm on Wednesday.

The Daily Mail gives a timeline:

Kelly is believed to have started his rampage at around 12:56am, shooting and killing a 24-year-old man in his driveway on Glendale Avenue.

Several hours after the initial shooting, he then started turning the gun on people at random – forcing locals to shelter in their homes.

At around 4.38pm he then shot a man dead as he sat in his car on South Parkway East multiple times, and two minutes later fired his gun at a woman near Norris Road and Interstated 240.

She was rushed to hospital with a bullet wound to the leg, and was transported to a hospital where she remains in a stable condition.

Crazed Kelly opened fire at an AutoZone store on Jackson Avenue just before 6pm, where he started to live stream the horror on Facebook.

Kelly can be seen in the footage getting out of his car, walking into the store and pulling a gun to shoot at a man inside the store twice. He remains in hospital in a critical condition.

The teenager then rants to the camera about ‘no faking’ saying ‘this s*** for real’ on the livestream, with citizens reporting the footage to police.

Officers then issued an alert about Kelly and his vehicle, but shortly after he carjacked and shot a woman at Poplar Avenue and Evergreen Street in an attempt to switch vehicles.

The woman was shot dead at 7.23pmm with Kelly driving off in her car, a gray Toyota SUV, before officers found another man suffering from gunshot wounds a minute later. He was taken to hospital in a stable condition.

Another woman was found shot dead on West Raines Road at 8.55pm, as Kelly crossed the state line and is accused of committing a second carjacking.

Police say that he held the driver of the Dodge Challenger up at gunpoint at a gas station in Southhaven, Mississippi.

The driver of the car was uninjured, and officers embarked upon a high speed chase on Interstate 55 that ended with Kelly crashing the car.

Officers recovered two weapons from the car, and footage shows Kelly grinning ear to ear after being put in the back of a police vehicle. 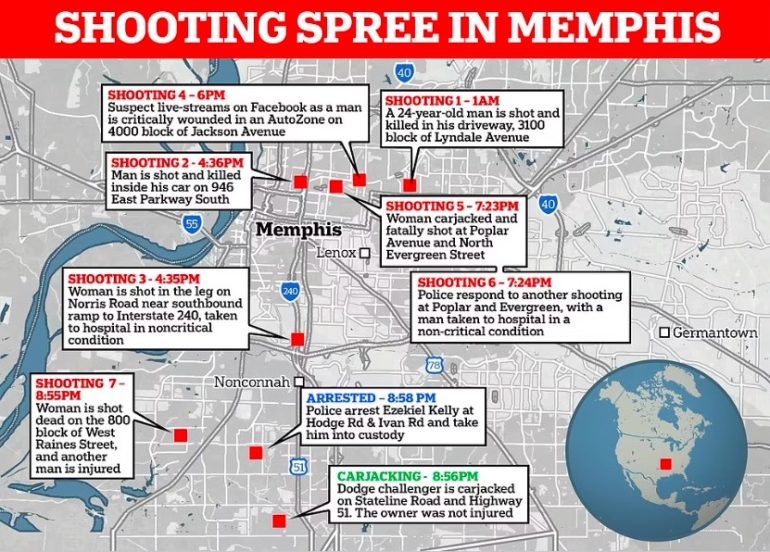 Kelly’s social media has been locked due to the graphic video, but a brief clip was captured of the shooting at AutoZone.

Independent journalist, Andy Ngo, was quick to grab what he could from Facebook before the account was shut down.

Breaking: I looked into the criminal history of Ezekiel Kelly, the #Memphis gunman. Last year he was convicted of aggravated assault & sentenced to 3 years prison but was released early. His attempted murder & other felony charges were dismissed.

He was charged today with murder pic.twitter.com/MSg5fGnFOz

One local reporter was having a difficult time doing her job because of what the city has gone through this week.

If Kelly had served his full sentence, 4 people would still be alive.

He even smiled during his mugshot.

Does this look like someone who has regrets for terrorizing the city? 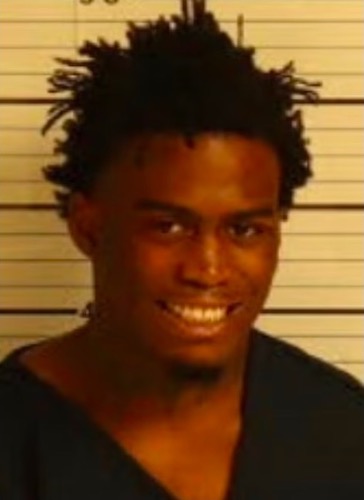 The left’s “soft on crime” nonsense has a very steep cost.