The Republicans are making some serious promises to turn things around if they take control the House of Representatives after the midterm election.

The forecast is looking pretty good on that, but Republicans can’t sit on their laurels. A red wave is something that voters make happen, not something that just happens.

House Minority Leader Kevin McCarthy and several other prominent Republican Members of Congress laid out their agenda in at a campaign event in Pennsylvania this week.

One major promise was to immediately halt the hiring of 87k IRS agents that would balloon the size of the agency to ridiculous proportions. While some dispute the figure, that is the number of personnel that the Treasury Department says could be hired with the $80 billion funding that was rubber-stamped in the Senate through reconciliation as part of the absurdly named “Inflation Reduction Act” back in August.

House Republicans vowed to immediately ‘repeal 87,000 IRS agents’ and launch a series of investigations, including into the ‘weaponization of the DOJ,’ if they retake the House come November.

‘Our job is to work for you, not go after you,’ McCarthy pledged to the crowd, mentioning that the No. 1 legislative priority was to roll back funds slated to go toward the Internal Revenue Service included in the Inflation Reduction Act.
Source: Daily Mail

Leader McCarthy announced a new “Commitment To America” which lays out the main priorities of the GOP — an economy that is strong, a nation that is safe, a future that is built on freedom, and a government that is accountable. 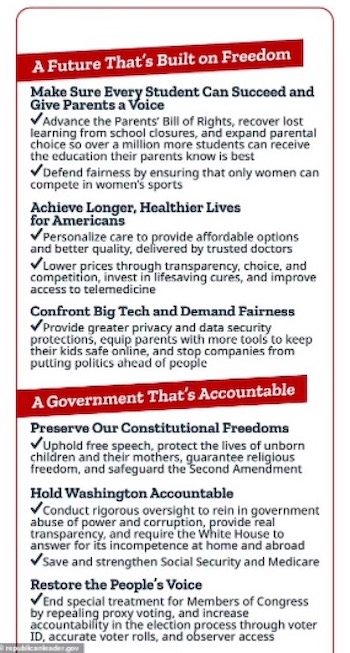 The Republicans also committed to launching a number of investigations to hod Democrats accountable for their atrocious governance.

Top House Republicans, including McCarthy, House Minority Whip Steve Scalise and Rep. Jim Jordan, also promised to launch a series of investigations – into the tumultuous Afghanistan pull-out, the origins of COVID-19 and, as Jordan put it, the ‘weaponization of the DOJ against the American people.’

‘House Republicans are committed to exposing and holding accountable those in our government who have come after “we the people” and we will do that in every area,’ Jordan said.

The Ohio Republican pushed the COVID lab-leak theory hard, ridiculing the idea that the COVID-19 originated in nature.

‘But they want us to believe no, no, no, it was a bat to a pangolin to Joe Rogan and then we all got it right?’ Jordan said to laughs. ‘I’m just a country boy from Ohio but I think it probably came from a lab.’
Source: Daily Mail

It’s nice to see that the GOP is standing up and fighting back instead of curling up into the fetal position and taking kicks to the kidneys.