It’s easy to put up banners that say “Refugees Are Welcome Here” when illegal migrants are flooding the Southern Border.

The blue-state virtue signaling on illegal immigration is crashing into reality as Texas Governor Greg Abbott continues to bus migrants to self-proclaimed “sanctuary cities” that are closer to Canada than Mexico.

They support illegal migration as long as it stays close to the border… the Southern border, that is.

The Mayors of D.C. and NYC have been complaining about Abbott’s new strategy of drawing attention to the crisis at the border for a few months now.

One particularly disgraceful culprit of this blue-state NIMBYism is Chicago Mayor Lori Lightfoot who has been incessantly whining over less than 150 migrants sent to her city — which is the third-largest in the country.

The approximately 135 illegal migrants bused into Chicago is a drop in the bucket compared to the 4.9 million illegal border crossings (and counting!) since Biden took office.

Lightfoot says that Abbott is “manufacturing a human crisis” by refusing to absorb and cover the costs for the millions of migrants that are crossing illegally every year.

She also called Abbott “racist” and that his policy of sending migrants to sanctuary cities is “un-American.”

Perhaps most disgustingly, she attacked Gov. Abbott’s faith on Sunday as she begrudgingly welcomed a bus of *checks notes*… 60 illegal migrants.

“He professes to be a Christian? This is not the Christianity and the teachings of the Bible that I know,” said Mayor Lightfoot.

MIGRANTS: Chicago Mayor Lori Lightfoot slams Gov. Greg Abbott: "He professes to be a Christian? This is not the Christianity and the teachings of the Bible that I know." pic.twitter.com/6thz9ejNRC

Hot take here, but she’s kind of not wrong about some of this. After all, why would you send people who are seeking asylum to Chicago of all places?

According to the website HeyJackass, more people have been shot in the head in Chicago this year than the number of migrants that have arrived on buses from Texas so far. 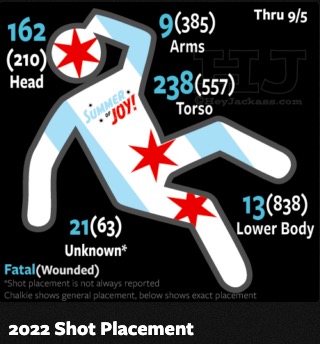 Clearly Mayor Lightfoot has other things to deal with than making sure migrants are cared for like… gun violence that is rampant in the city. 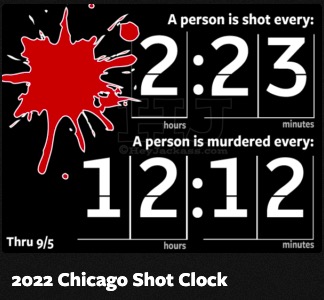 Perhaps this is her complaint. But this crime wave isn’t anything new — gun violence has been a problem in Chicago before the migrants were arriving.

Maybe before proclaiming Chicago a “Sanctuary City” the Mayor and City Council should make sure that there are enough resources in place to care for a couple of hundred asylum seekers instead of whining about it.

But whining about it seems to be Lightfoot’s go-to tactic. She did the same last week as a busload of 75 migrants from Venezuela arrived on Wednesday courtesy of Gov. Abbott.

In her speech touting how magnanimous and welcoming Chicago was in taking on the burden of a handful of migrants, Lightfoot said that the Governor of Texas’s policy of busing migrants — to where he was assured that refugees are welcome — is just a “political stunt” as well as “inhumane, racist, xenophobic, and unpatriotic.”

She also said that it shows that Governor Abbott is a “man without any morals, humanity, or shame.” She also blasted the bus companies for complying with the governor’s order.

Mayor Lori Lightfoot torches Texas Gov. Greg Abbott (R) over bussing migrants to Chicago: He is "a man without any morals, humanity or shame."

"I also want to say: Shame on the bus companies, who frankly are just as complicit as being a part of this indignity." pic.twitter.com/6akADE7HNO

When Lightfoot responded to a question, she whined again about the lack of “collaboration” from the Governor of Texas who is just dropping off the migrants.

MIGRANTS ON BUSES: Chicago Mayor Lori Lightfoot slams Texas Gov. Greg Abbott: "It is my prayer that this man finds his humanity" and accuses him of "trying to create crises in Democratic-led cities." pic.twitter.com/i2NQ7ZSmK9

You don’t hear Texas bitching about not getting any advanced warning from the cartels about the numbers of migrants that are being smuggled across the border… because that’s not how this works.

Abbott’s point is being made every time these blue-state Dems complain about a small sample of what Texas has to deal with on a daily basis — this flood of migrants strains resources and simply is not sustainable.

Here is a longer version of Lightfoot’s “Welcome to Chicago… (I Guess)” speech on Thursday.

Chicago’s nickname is “The Windy City” which seems apropos as this particular Mayor seems to be very good at blowing out hot air every time she opens her mouth.

Lightfoot is not addressing the real issue here — she’s complaining that these migrants are coming to Chicago and the “infrastructure” isn’t there to deal with it, but the real issue is that they’re crossing illegally into the United States and no country can manage this sustained flood of migrants that is numbering the millions — and that doesn’t even include the “got-aways.”