The “diversity, equity, and inclusion” crowd think that this is acceptable… do you?

In the last couple of days, multiple photos and videos have spread online of a male teacher who wears his fetish caricature of a woman in high school shop class while instructing students.

The photos and videos shared online appear to have been captured by students and show the teacher wearing a blonde wig, short shorts, and an extremely large prosthetic bust which clearly outlines the nipples through the tight shirts.

It's real. Believe it. pic.twitter.com/AppKW2kAxB

Shout out to Oakville Trafalgar High School @OakTrafalgarHS
for their employment standards.
My UK school teachers were never as well dressed as these Canadian teachers…🤡🌎 pic.twitter.com/1uJWBBJmL4

How is this different from blackface? It’s just as offensive to see feminine attributes caricatured by a man as it is to see racial stereotypes mocked by someone from another race.

Each breast is the size of a rather large watermelon, for crying out loud! This sort of thing is ridiculous on an actual woman, but on a man, it’s just so much worse.

It shouldn’t even need to be said that this is unacceptable for a teacher in a classroom.

Oakville Trafalgar High School is in the Halton District School Board (HDSB). In October 2021, the HDSB released its guidelines on Gender Identity and Gender Expression in Schools.

“The Halton District School Board (HDSB) recognizes the rights of students, staff, parents/guardians, and community members to equitable treatment without discrimination based upon gender identity and gender expression,” states the policy.

It adds, “The HDSB is committed to establishing and maintaining a safe, caring, inclusive, equitable and welcoming learning and working environment for all members of the school community including… staff… who identify as, or are perceived as … trans … and those who are questioning their sexual orientation and/or gender identity(ies).”

Feminist news site Reduxx posted the identity of the teacher and confirmed it with a faculty listing at the school and a photo connected to a Google account.

The man seen in the photos and videos is a Manufacturing Technology instructor who allegedly began identifying as a woman last year. The teacher now goes by the name Kayla Lemieux…

…Lemieux is listed within the faculty directory on the OTHS website. His official school e-mail address is also connected to a Google account which has a photo visually verifying his identity.
Source: Reduxx

The lone Canadian outlet that is reporting on the story, blogTO, managed to get a statement from an HDSB spokesperson.

“As this is a personnel matter, we cannot provide further information,” the HDSB rep told blogTO adding, “The Halton District School Board is committed to establishing and maintaining a safe, caring, inclusive, equitable and welcoming learning and working environment for all students and staff.”

The spox also noted that the board does “strive to promote and support a positive learning environment in schools,” and that it “recognizes the rights of students, staff, parents/guardians and community members to equitable treatment without discrimination based upon gender identity and gender expression.”

But then, tellingly, they added, “Gender identity and gender expression are protected grounds under the Ontario Human Rights Code.”

Ah. So, they’re afraid that if they say anything, they could be taken to Ontario’s kangaroo court known as the Ontario Human Rights Commission.

Fascinatingly, blogTO’s big takeaway from a fetishist prancing around in a high school shop class with massive fake breasts with nipples poking through the fabric is that it’s a discussion over what is “appropriate attire” for teachers and the harassment that “curvy” women and the Alphabet People get from the bigots.

Angry people are bombarding both The Halton District District School Board and Oakville Trafalgar High School on Twitter right now, arguing (among other things I will not repeat) that the teacher shouldn’t be allowed to wear such revealing garb to school.

Just a few weeks ago, an elementary school teacher from New Jersey went viral for having a “curvy” figure, inadvertently soliciting thousands of unwanted sexual advances and insults.

1. That’s not a woman.
2. This is far beyond a dude in a dress — this is a fetishist that is flaunting his fetish in front of high school students.
3. Students, parents, and fellow teachers are afraid of saying anything because they will be dismissed as bigots and potentially have a human rights complaint filed against them by the aggrieved party.

The blogTO response in defense of this should be no surprise to anyone who understands what Canada has become.

The guy who wore blackface is described as depicting an "offensive and hurtful" caricarture and he was swiftly fired. The article discusses concern for the traumatized students. Yet the teacher subjecting students to grotesque, sexualized womanface is painted as the victim.

It would appear that there are certain things that are acceptable for teachers in Canada like the mocking womanface boldly on display, but other things like stupidly painting your face black — without expressly saying it was for racial reasons — will cause you to get fired.

You’d think that with this guy as the Prime Minister… 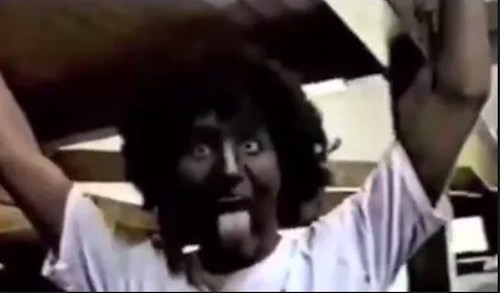 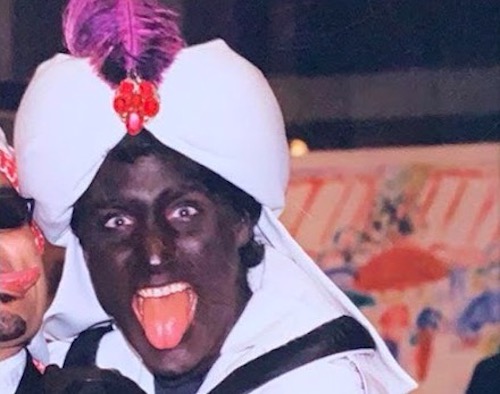 …that blackface would be tolerated a bit better. Maybe the issue was that the teacher with the black paint didn’t bother with the rest of the costume.

You know, that’s probably it.