It’s the one thing they’re not allowed to say. Not only did they SAY it, they WORE it on their clothing.

For years, we’ve heard the chants of ‘Black Lives Matter’. We’ve seen it painted on our streets. We’ve seen the marches — peaceful and otherwise.

Some of us still remember those cops in Dallas who gave their lives while protecting the BLM marchers from a crazed gunman with a racist agenda who wasn’t shooting at the marching crowd — but at the cops who were protecting them.

Even then, Obama made sure he uses the occasion of their memorial to whine about systemic racism. The race question is always one-sided.

And when the house of cards begins to fall apart, and it evidence starts mounting that BLM was just a grift on a massive scale all along, we’re not supposed to notice or say anything about how this is the same group that browbeat us for that last few years over various causes.

If you dare object to the obvious lies the 1619 Project was built around, or denounce the new doctrines rooted in critical race theory and DEI, you are a bigot or a ‘fragile’ white person.

If you disagree as a non-white person, you called even uglier names not worth printing in this article. But we all know what they are. It all comes down to the white/non-white oppressor/oppressed narrative that innumerable Class Warfare agitators need to keep going if they are to keep their various grifts alive.

We live in such a clown world that even saying the phrase ‘white lives matter’ was enough to get you denounced as a white supremacist. Even ‘All Lives Matter’ was denounced because it took the spotlight off the one word in the slogan the cause truly cared about.

So when Canace Owens and Kanye West show up for an event in Paris dressed like this, it’s genuinely subversive and (to throw the left’s own language back at them) ‘speaking Truth to power’.

The front has an image of the Pope… 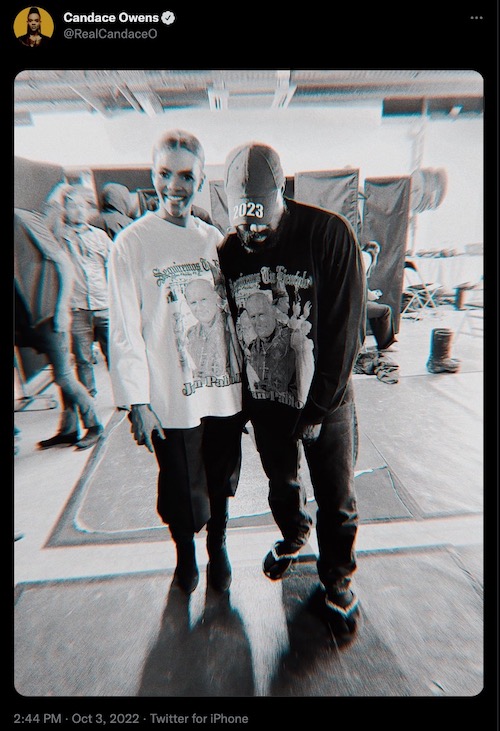 The back shows the words that must not be spoken 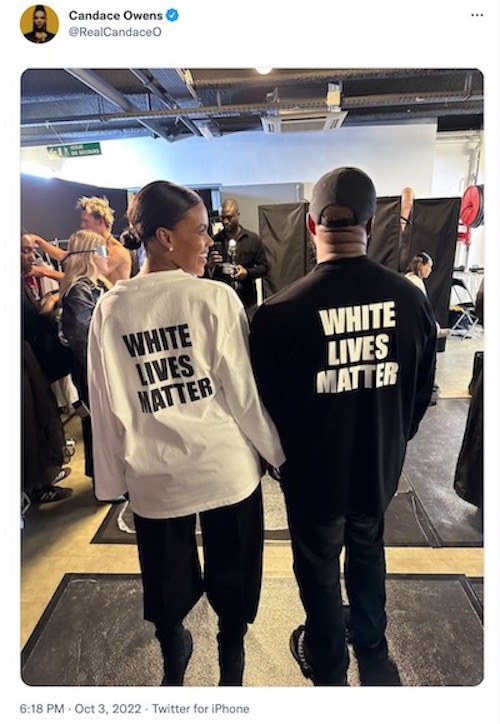 What was the event?

Rapper Kanye West attended his Yeezy Season 9 collection presentation in Paris, France, on Monday wearing a T-shirt emblazoned with the words “White Lives Matter.”
The artist, also known as “Ye,” was joined by conservative commentator and author Candace Owens at the event, who also wore a matching T-shirt as West unveiled his latest clothing collection. Other models at the event were also wearing different variations of the same design, according to a report by Complex. –EpochTimes

We’d describe the backlash they got but you probably already know even without our telling you.

It brought out the ugly side of the leftist trolls, with all the same tired bigoted lines.

They never do seem to get tired of those threadbare lies, do they?

Kanye has never been one to let public opinion dictate his decisions. For that matter, neither has Candace Owens.