Remember when they laughed at Trump’s Space Force plan? Who’s laughing now that Russians are nonchalantly talking about shooting satellites out of orbit?

Here’s a clip from a Russian television show where panelists are grappling with the best ways to solve the ‘problem’ of Elon Musk’s Starlink system.

Here’s the conversation recorded in the clip:

We should shoot down his satellites. Or all of them.
We could just shoot down one and he will shut down this Starlink immediately.
Electronic Countermeasures work very well. Turns out troop control is completely electronic.
If we disable it they won’t be able to coordinate attacks, and that’s good for us.
Shoot it down? Easy. We have the systems to do it. He’ll remove the rest immediately.
Well, you can’t remove it from orbit.
I mean, he’ll turn them off.
Igor, Pentagon won’t let him shut them down.
He said, ‘Pentagon give me money’, they said, ‘come here’.
So he opened a charity account
So we have to shoot them all down.

This panel assumes that the American government, especially the military, has the kind of control over Americans that Moscow has over Russians.

It’s true that we now see far more open displays of political corruption than what we were prepared to overlook even a generation ago, but that doesn’t mean all American businessmen are driven by the same dynamics that have corrupted the Russian economy.

As the clip admits, Starlink has been an absolute game-changer in Ukraine. It was the brainchild, not of NASA, or some government think-tank, but of an ‘eccentric’ billionaire physicist businessman who wanted to build an innovative solution to a global problem of internet access.

His creative use of personal capital — creatively reinvested — has offered a solution that no government could provide. Because that’s exactly the mechanism by which capitalism works.

Maybe the reason he’s different than other Silicon Valley billionaires has something to do with Musk having actual degrees in economics and physics, two disciplines where facts are facts regardless of how you might feel about them, disciplines where reality does not bend to the will of political pressure. The sort of discipline where a single unquestioned wrong assumption can cause a billion-dollar project to (quite literally) blow up on the launching pad.

Now that the war has dragged on for months, with no indication that anyone is at all interested in a negotiated end to the fighting, he told the Pentagon if they want to keep using his very expensive satellites to provide internet access to Ukraine’s government, someone will have to pick up the tab. He’s not running it as a charity.

The Russians were right to bring up Starlink’s charity, but that had nothing to do with the Pentagon. For example: 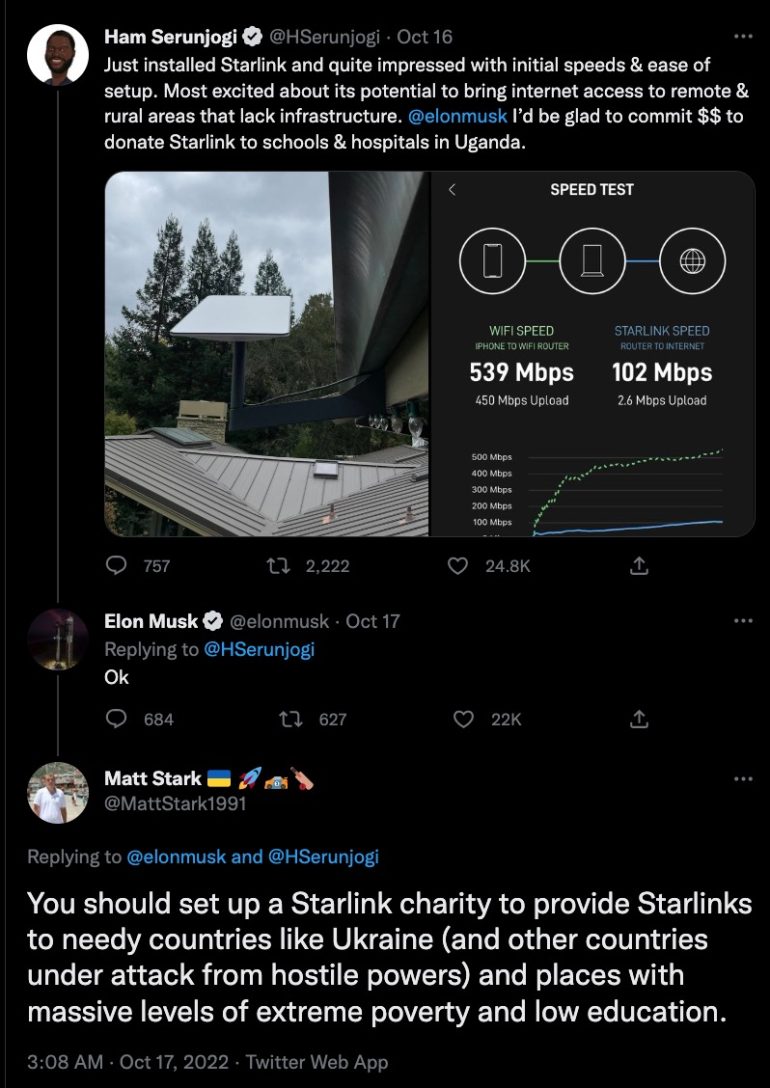 But the Pentagon reference brings us to the other takeaway from this conversation. Whether the Russians can actually DELIVER on the intent of shooting down a satellite, they have the IMPULSE to employ that strategy.

Seeing how reliant we are on our satellites for everything from communications to GPS positioning, suddenly, Trump’s idea of having a dedicated Space Force to protect our interests in orbit looks practically visionary.

But don’t expect anyone in this administration to thank him for that.