This is just a new chapter in the ongoing witchhunt of former President Donald Trump.

Attorney General Merrick Garland announced in a press conference on Friday that he has appointed a Special Counsel to investigate Trump over the non-crimes of publicly questioning the results of the 2020 election and keeping mementos from his time as President.

“The first, as described in court filings in the District of Columbia, is the investigation into whether any person or entity unlawfully interfered with the transfer of power following the 2020 presidential election or the certification of the Electoral College vote held on or about January 6, 2021,” said AG Garland.

“The second is the ongoing investigation involving classified documents and other presidential records, as well as the possible obstruction of that investigation, referenced and described in court filings in a pending matter in the Southern District of Florida,” he added.

Attorney General Merrick Garland appointed a veteran prosecutor currently investigating alleged crimes against humanity in Kosovo to determine whether former President Donald Trump will face federal charges in connection with his attempts to reverse the 2020 presidential election or his retention of sensitive government documents at his Mar-a-Lago resort in Florida.
Garland tapped Jack Smith, a former federal prosecutor in the Brooklyn and Nashville, Tenn., US Attorney’s offices — as well as a former Manhattan assistant district attorney — to take on the cases Friday, three days after the 76-year-old Trump announced his candidacy for the 2024 Republican presidential nomination.
In a sign of the sensitivity of the cases, the AG looked beyond America’s borders in selecting Smith, who has spent the past four years in The Hague as a specialist prosecutor of purported war crimes committed by the ethnic Albanian Kosovo Liberation Army during and after the struggle to separate Kosovo from Serbia in the late 1990s.
Source: New York Post

A “sign of sensitivity”… riiight. It’s not that they wanted to be able to say that they’ve appointed a guy who specializes in prosecuting war crimes at The Hague and investigated public corruption and election crimes, right? No, it’s because they don’t want to appear partisan.

CNN gave a profile of Jack Smith and made some interesting points about how appointing a Special Prosecutor (now that the House is in GOP hands) is beneficial for the Biden administration’s witchhunt, though they didn’t exactly frame it that way.

Paula Reid, CNN’s senior legal affairs correspondent, said that the Special Counsel has “no limit on its budget” — though the DOJ will have to go to Congress for that — but otherwise, it shields the ongoing investigations into Trump from Congressional oversight.

CNN then brought on disgraced former FBI Deputy Director Andrew McCabe — who signed off on the 4th unjustivied FISA warrant on Carter Page — to ask about the DOJ’s move to appoint a Special Counsel. McCabe praised the DOJ’s decision because, he said, it shows that they did “everything they can” to avoid “even an appearance” of a conflict of interest.

Biden’s Unjust Administration: McCabe vs. Scheller … A Tale Of Two Firings
‘I’m Sorry’: McCabe Admits To Lying About Being The Leaker
McCabe Is McCrazy: Former FBI Director And Trump Hater Says Trump Might Be A Russian Asset

Can you believe the nerve of that guy to go on national television and talk about “conflicts of interest” as he works as a propagandist for the Deep State? Unbelievable. Partisan hack and former CIA director John Brennan is probably over the moon about this move, too.

Here is the clip if you want to try to get through it.

Of course, President Trump is crying foul since the man has been under one federal investigation or another since 2016 — including two separate attempts at impeachment that failed.

Trump reacts to AG Garland appointing a special counsel to investigate him: "If you can't beat him, indict him."

Now the Department of Justice is going after him for his rally on January 6, 2021 where he said on video to be “peaceful” and then told everyone to go home when it got rowdy, and then for doing what every President has done — brought mementos of his time in office to his residence.

Even the Washington Post admitted this… conveniently after the midterm election.

Exclusive: Federal agents believe former president Donald Trump’s motive for allegedly keeping classified documents was largely his ego and a desire to hold on to the materials as trophies or mementos, according to people familiar with the matter. https://t.co/HQNtRMChJ3

WaPo’s slogan, “Democracy Dies in Darkness” appears to be a goal — they seem to be quite happy to leave relevant details of news stories in the shadows.

Journalism is about covering important stories. With a pillow, until they stop moving.

JEAN-PIERRE: "This IS NOT an administration…that will politicize the Department of Justice." pic.twitter.com/619eTAfr4B

That’s total B.S. and we all know it.

Biden’s Department of Justice with Merrick Garland at the helm is looking more and more partisan because of what they choose to investigate and what they ignore.

They couldn’t be bothered to investigate the threats against pro-life groups and churches from pro-abortion extremists, nor would they attempt to enforce laws to protect Supreme Court Justices being harassed at their homes by protesters — even after one of those nutbar pro-aborts admitted he was on his way to kill Justice Kavanaugh — but the DOJ is going after pro-lifers for peacefully demonstrating in front of abortion clinics.

The DOJ knew that the Russiagate investigation that handcuffed President Trump for his entire term in office was based on oppo dirt from the Hillary campaign that was a load of B.S. — but they did it anyway.

The evidence of pay-to-play leveraging Joe Biden’s name and position as Vice President on Hunter Biden’s laptop — that’s not worth looking into. Nah, that’s “Russian disinformation” even though it’s been corroborated by multiple whistleblowers. They just sat on that for years while going after Trump.

Right-wingers know exactly what this is.

It's so blatantly corrupt.

The corrupt DOJ appoints a special counsel to investigate President Trump the same week he announces a 2024 run.

Has there ever been a more politicized and weaponized DOJ in American history?

Garland's appointment of a special counsel to investigate Trump is election interference.

Joe Biden has completely weaponized the Department of Justice to attack his political opponents.

3 days ago, Trump announced and now a Special Counsel. 🧐

This is Trump derangement syndrome but this time with a gun and badge. #JusticeCorrupted https://t.co/YvHY4U8XYS

Garland appointed a special counsel to investigate his boss’s political enemy, for non-crimes of objecting to the 2020 election and keeping personal copies of presidential records.

He did not appoint a special counsel to investigate clear evidence of Biden’s foreign corruption.

"His team initially won a conviction against the former Gov. Robert McDonnell of Virginia, a Republican, but the Supreme Court overturned it."https://t.co/a6n61KPaPB

So the new special counsel seems to be not only about harassing Trump, but also members of Congress, state legislators, activists, Mike Lindell, and anyone who dared to exercise their rights under law to question the 2020 election…

We’ll just have to wait and see if the Mr. Fancypants War Crimes investigator from The Hague is as effective at taking Trump out as a Presidential candidate as he was with former Virginia Governor Bob McDonnell back in the 90s.

You see, Jack Smith is recovering from a bicycle accident in the Netherlands. No, really. It was in The New York Times report on AG Garland’s announcement.

Congresswoman Marjorie Taylor Greene pointed out that the Republican-controlled House has an advantage in dealing with this witchhunt.

Republicans will need to refuse to appropriate any funding to Merrick Garland’s Special Counsel and defund any part of the DOJ acting on behalf of the Democrat party as a taxpayer funded campaign arm for the Democrat’s 2024 presidential nominee.

Look it up!@GOPLeader is going to put it in place.

That means no money for Garland’s politically weaponized Special Counsel.

Don’t promise too many jobs!

We’ll just have to see if the Republican House members have found their spines or not.

But hey, at least we know that the Dems are still afraid of Trump coming back.

Check out ClashDaily’s exclusive ‘Trumpinator: We The People’ merch with original artwork by Doug Giles. 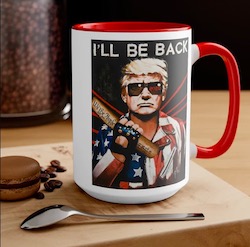 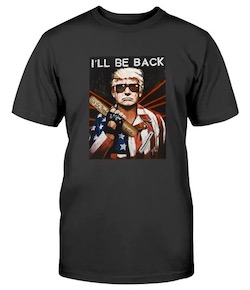 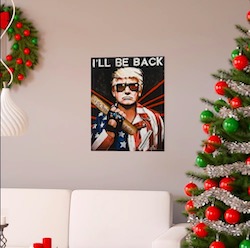 Check out more Righteous & Rowdy gear at our ClashDaily store.