A whistleblower from the Department of Health and Human Services says that the government hands over children to modern day slave holders. Where’s the outrage?

Rodas claims that HHS is “doing work for the cartels” by handing over children to traffickers after they left HHS custody.

Project Veritas then went on a 9-month investigation across the country to addresses of case files Rodas had worked on to see if trafficking was taking place. They found that there were residences within a few miles of each other where dozens of migrant children are living with unrelated older men.

Most of the kids are from Guatemala and their mothers are not in the United States.

When questioning the children, one little girl didn’t know her last name, how old she was, or who some of the men she was living with were. Other kids admit that they live in homes with multiple adult men and their mothers are still in Guatemala.

One sixteen-year-old who came across the border illegally says that after she was brought to her female sponsor in the U.S., she was being sex trafficked in her own home. Her sponsor was a woman claiming to be her “aunt” who says that she knew the teen when she was young, but the girl doesn’t remember her.

Rodas told James O’Keefe of Project Veritas that when she raised concerns about the number of unaccompanied minors being housed with unrelated adults, her concerns were dismissed and she was told, “I think you need to understand that we only get sued if we keep kids in care too long. We don’t get sued by traffickers.”

The whistleblower, Tara Lee Rodas, volunteered to assist the U.S. Department of Health and Human Services [HHS] with the processing of unaccompanied migrant children and was deployed to the Emergency Intake Site in Pomona, California…
…The whistleblower affirmed that she has questioned federal government bureaucrats about the potential wrongdoing happening within their institutions, and the response has usually been dismissive of her concerns. She believes she has suffered retaliation at work for raising these issues.
“I said [to the command center executives], ‘We’re getting ready to send another child [to Austin, Texas],’ and they said, ‘Tara, I think you need to understand that we only get sued if we keep kids in care too long. We don’t get sued by traffickers. Are you clear? We don’t get sued by traffickers.’ So, that was the answer of the United States federal government. HHS did not want this information to get out,” Rodas said.
“They knew I had made protected disclosures and they retaliated against me as a whistleblower and had me kicked off the site so I could no longer research the cases,” she said.
Source: Project Veritas

This has been going on for years. Sen. Rob Portman (R-OH) was grilling HHS officials about handing kids over to human traffickers during the Obama administration.

Sen. Portman is still blasting HHS for the handling of “unaccompanied minors” which has exploded under the Biden-Harris administration.

They’ve done anything but that.

This administration is empowering human trafficking cartels — especially those that deal in children — with their soft policies that encourage unaccompanied minors to enter the country illegally.

Is that more “humane” than denying entry or deportation?

But it’s even worse than that. The Biden-Harris admin had to scale back the vetting of the sponsors of these children because they were so overwhelmed by the number of unaccompanied minors.

Unaccompanied migrant children face a greater risk of trafficking because of the way that the Biden administration discharges children from government custody, a senior senator told the Washington Examiner.
Sen. Rob Portman, an Ohio Republican, said the flawed system that the government relies on to find sponsors for children who come over the border has been further weakened by President Joe Biden, and the senator says that children will suffer.
Earlier this spring, amid the highest-ever levels of migrant children arriving alone on the U.S.-Mexico boundary, the Biden administration chose to stop collecting as much personal information from adults who volunteered to take care of the children after they were let out of the Department of Health and Human Service’s child care centers…
…Also, because of the way HHS releases immigrant children, local schools are not informed, meaning that they are not prepared for new enrollees. Portman has tracked this specific issue for six years and relayed that he was told by state and local officials that “they are not told anything about the arrival of unaccompanied children in their states.”
Source: Washington Examiner, July 4, 2021.

“The U.S. federal government has a responsibility for these children and cannot and should not allow them to fall victim to human trafficking, abuse, or other harm upon their release from federal custody,” Portman told the Washington Examiner.

We know that truly horrific and unspeakable things are happening to some of these unaccompanied minors.

In addition, because of the admin’s awful policies that encourage unaccompanied minors to enter illegally, the Biden-Harris administration had to scramble to house the children and decided to forego the background checks on the caregivers and employees in these emergency facilities.

In the rush to get children out of overcrowded and often unsuitable Border Patrol sites, President Joe Biden’s team is turning to a measure used by previous administrations: tent camps, convention centers and other huge facilities operated by private contractors and funded by U.S. Health and Human Services. In March alone, the Biden administration announced it will open eight new emergency sites across the Southwest adding 15,000 new beds, more than doubling the size of its existing system.
These emergency sites don’t have to be licensed by state authorities or provide the same services as permanent HHS facilities. They also cost far more, an estimated $775 per child per day.
And to staff the sites quickly, the Biden administration has waived vetting procedures intended to protect minors from potential harm.
Staff and volunteers directly caring for children at new emergency sites don’t have to undergo FBI fingerprint checks, which use criminal databases not accessible to the public and can overcome someone changing their name or using a false identity.
Source: Associated Press, March 27, 2021.

To sum up, the Biden-Harris admin’s border policies mean that more “unaccompanied minors” cross the border illegally in the hands of the cartels. Once they enter the U.S., HHS puts them up in crowded or makeshift facilities, then ships them off to unvetted sponors who agree to care for them and then thousands of children are just… lost.

While the HHS is using taxpayer dollars to hand kids to become wage-slaves in the underground economy or worse, U.S. Marshals and ICE are working to rescue kids form being trafficked.

Sometimes these kids are abused again after they have been “rescued.”

Some of these kids are really, really young to be crossing multiple international borders without their parents.

But according to the mainstream narrative, right-wingers lack compassion about the border crisis because we want an end to this abuse of children, drug trafficking, and having desperate people die trying to make the treacherous journey into the country.

We could end this horror quickly, but our lawmakers don’t seem to want to.

Isn’t it funny how it’s only the Southern border in the United States that shouldn’t be defended?

The exception is for those dirty “unvaccinated” people — the Biden-Harris admin is determined to keep them out.

👀 Joe Biden's ending Title 42 at the border, but a newly announced DHS rule will extend a ban on unvaccinated individuals lawfully crossing the border for economic/other purposes.

It makes no sense. #BidenBorderCrisis

The TSA has extended the rule that the unvaccinated cannot enter the U.S. until at least January 8 of next year.

Of course, illegals still can come in without any tests or vaccines.

What a ridiculous measure.

What an unbelievable farce this all is. 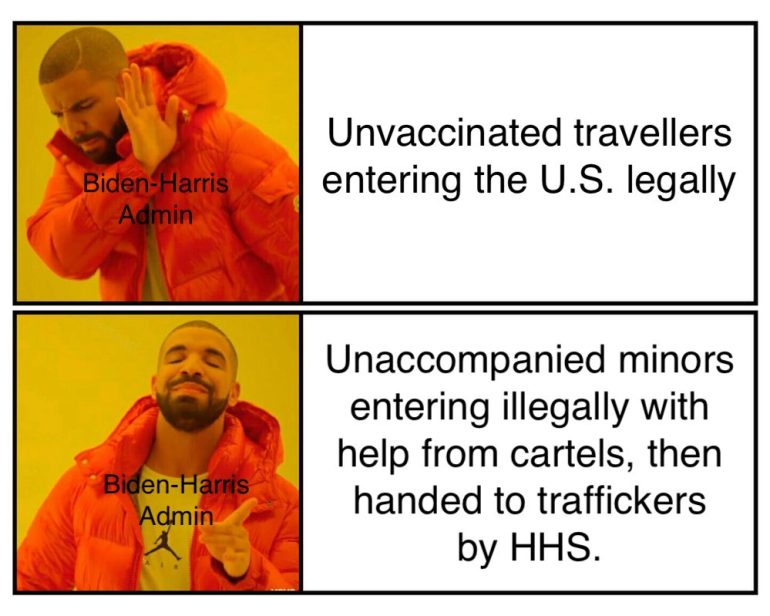