A segment that aired on the “Today” Show was shared on the show’s official Twitter account and quickly deleted. It was also removed from the Today Show website. Why did that happen?

NBC News national correspondent Miguel Almaguer made the report that raised new questions about the bizarre attack that has caused speculation on both sides of the political aisle — Dems insist that the nudist hippie illegal from Canada is a “Mega MAGA” extremist inspired by the January 6 “insurrectionists”, while one theory on the right was that this was a gay encounter gone wrong. Others have noted that this seems to be a deeply disturbed individual suffering from psychosis and committed a horrific crime as we’ve seen other psychotic, drug-addicted individuals do all over the country.

The report by Almaguer clarifies some questions raised by the initial reports. For example, Politico’s original piece made it sound like there was another individual in the home who was the one that opened the door when the early morning attack occurred, but it was apparently Mr. Pelosi who had opened the door.

There are more questions raised, however, because Almaguer’s report says that after answering the door, Mr. Pelosi had not indicated that there was an emergency and walked away from police and several feet toward the attacker.

“It’s unclear if the 82-year-old was already injured or what his mental state was,” said Almaguer in his report.

Almaguer concluded his report by telling “Today” co-host Craig Melvin, “We still don’t know exactly what unfolded between Mr. Pelosi and the suspect for the 30 minutes they were alone inside that house before police arrive. Officials who are investigating this matter would not go into further details about these new details.”

Back up… they were in the house for 30 minutes before police arrived and DePape waited until police were there to witness him attacking Pelosi and capture it on their bodycameras? That seems weird.

Here’s the video that was scrubbed by NBC News:

In removing it from their Twitter account and website, NBC News says "the piece should not have aired because it did not meet NBC News reporting standards."

Will Almaguer face a suspension or punishment? What about his producers? Will they give an on-air correction? (2/2) pic.twitter.com/x5KXBJRdw1

“This morning, Paul Pelosi is home back at the house that became a crime scene a week ago today. NBC News learning new details about the moment police arrived,” reported Almaguer. “Sources familiar with what unfolded in the Pelosi residence now revealing when officers responded to the high priority call, they were seemingly unaware they’d been called to the home of the Speaker of the House.”

“After a ‘knock and announce’, the front door was opened by Mr. Pelosi. The 82-year-old did not immediately declare an emergency or try to leave his home,” Almaguer continued. “But instead, began walking several feet back into the foyer toward the assailant and away from police. It’s unclear if the 82-year-old was already injured or what his mental state was, say sources,” he added.

At 2:31 a.m., San Francisco Police Department (“SFPD”) Officer Colby Wilmes responded to the Pelosi residence, California and knocked on the front door. When the door was opened, Pelosi and DEPAPE were both holding a hammer with one hand and DEPAPE had his other hand holding onto Pelosi’s forearm.

It also contradicts what the 911 dispatcher told police that Pelosi said that DePape was “a friend” named David, nor does it make any mention of the “RP” (reporting person) Paul Pelosi sounding “somewhat confused.”

"RP (reporting person) stated there's a male in the home and that he's going to wait for his wife. RP stated that he doesn't know who the male is but he advised that his name is David and that he is a friend.”
pic.twitter.com/O0HeS0s0I5

Apparently, someone didn’t seem to like Almaduer’s segment that was based on the police report and “sources”.

The page that had the video now says, “The piece should not have aired because it did not meet NBC News reporting standards.”

That must be a new reporting standard since anonymous sources completely fabricating stories out of whole cloth to generate a week-long outrage cycle in the news was standard fare when Trump was President.

Let’s be real for a second… what probably happened is that someone very powerful was upset that these “new details” aren’t all that flattering to Paul Pelosi and don’t smear the “Mega MAGA Republicans” enough, so the sycophantic press had to nix it at the behest of someone who they are ideologically aligned with. You can wrack your brain on who that could be…

Gregg Re, a producer on Fox News’s “Tucker Carlson Tonight” said that NBC News has refused to answer why the report was deleted.

@NBCNews has refused our inquiries as to why they deleted their reporting about Paul Pelosi opening the door for cops, failing to declare ‘an emergency,’ then walking towards the BLM hippie nudist in his home whom he called a ‘friend.’request for comment stands. deadline 7 PM ET

In a Daily Mail article posted on Friday that highlights “Five Key Questions” about the attack on Paul Pelosi, question number 3 details what happened and it differs slightly from the NBC News report.

San Francisco Police officers Kolby Wilmes and Kyle Cagney were dispatched to the residence of House Speaker Nancy Pelosi and Paul Pelosi around 2:27 a.m. on Friday, October 28, for an ‘A-priority’ well-being check.
When they rang the doorbell, DePape reportedly told Pelosi not to open the door, but Pelosi did anyway using his left hand.
Pelosi and DePape stood in the dimly lit foyer and faced the officers as Pelosi calmly greeted them, according to the police report.
When one of the officers asked the men what was going on, DePape responded ‘everything’s good’ and pulled his hands toward his body.
When an officer turned on his flashlight, DePape could be seen holding the bottom handle of the hammer with one hand and Pelosi’s right arm with the other. Pelosi’s right hand was also on the handle of the hammer.
When an officer ordered for the men to ‘drop the hammer,’ DePape raised the hammer and said, ‘um, nope’ as he tried to pull it away from Pelosi who exclaimed ‘hey, hey!’
DePape then gained control of it and struck Pelosi’s head, which knocked Pelosi unconscious. Officers immediately tackled DePape and arrested him.
Source: Daily Mail

One easy way to clear up all the confusion and put an end to the speculation would be to release the bodycam footage worn by officers, video from the U.S. Capitol Police cameras, and any other surveillance video that may have captured the break-in and the attack. But they aren’t going to do that. The SFPD has said that they will not release bodycam footage of responding officers nor will the Capitol Police release any video they collected from that night.

NBC's Kristen Welker: "Are you planning to release the 911 call or any body camera video [from the Paul Pelosi attack]?"

San Francisco DA: "Not at this time." pic.twitter.com/8WTgHnqeOo

As for a toxicology report on DePape and Paul Pelosi who admitted in August to driving drunk this spring and causing an accident.

Right-wingers have been calling for the release of the video footage for days.

Now that a few days have passed, and with crazy theories/rhetoric flying around, would be good to see SFPD release info in Paul Pelosi attack: 1) 911 call audio; 2) officers' bodycam video; 3) toxicological tests; 4) all reports. Facts are vital to understanding.

I DEMAND the release of the Pelosi 911 call and the police BODY CAM footage. Usually they can't release that stuff fast enough, especially when BLM complains about the cops. RELEASE IT ! (Or is there something they're hiding from us?) pic.twitter.com/2TezMFwqqE

i dont know what happened to paul pelosi

but there is no published hard evidence of anything so why would I take their official story as fact?

Transparency is the antidote to “misinformation.” Yet for some reason, the San Francisco Police Department is refusing to release bodycam video of the attack on Paul Pelosi. https://t.co/8bFxJgIiRx pic.twitter.com/vmjdYmhoKe

On Friday evening, Lester Holt reports on the attack and Speaker Nancy Pelosi’s first public response about it but doesn’t mention the Today Show segment and report by Almaguer.

NBC Nightly News anchor Lester Holt reports on Nancy Pelosi speaking out about her husband's condition.
He DOES NOT issue an on-air correction for a dubious report from the Today show about the incident, which the network admits "did not meet NBC News reporting standards." pic.twitter.com/CZMAjGpQEJ

Gee, why could that be?

If you don’t want conspiracy theories about the Paul Pelosi attack then explain why the Today Show did this package with all sorts of crazy new details..

Understand that we are not going to have an official release of the 911 call or any video and Paul Pelosi will never make any statement and all the regime media will tell us not only that we’re crazy but that this was part of a right-wing plot to destroy Our Democracy. pic.twitter.com/ef12c88EzN

The attack on Paul Pelosi was awful and it’s great that the 82-year-old is back home and recovering.

While the left needs us to say that there is no place for political violence in America — and that’s 100% true — but let’s face it… the facts don’t line up so neatly for the Regime Media that it was an attack done by a GOP extremist.

It seems rather implausible that there was a die-hard GOP supporter who lives in a converted school bus in Berkley surrounded by BLM signs and a rainbow hemp flag who also happens to be a nudist hippie illegal alien hemp jewelry-maker from Canada.

The blog attributed to DePape talked about conversations that he had with fairies. He was clearly suffering from some sort of mental illness. Remember, the bleeding-heart left thinks it’s “compassionate” to just lets mentally ill people wander aimlessly on the streets self-medicating with street drugs instead of getting proper treatment, and sending them back on the street if they commit crimes.

This seems (to me, at least) to be a crime by a psychotic individual who latched onto a public figure that was accessible and not necessarily politically motivated.

Violent crime is up in cities and Democrats seem to do nothing about it.

Maybe this horrific attack on Nancy Pelosi’s husband will change that… or maybe they’ll continue to blame Repbulicans.

If you don’t live in some Leftist hellscape, we’ve got the shirt for you… our ClashDaily Exclusive tee “Marked Safe From Hammer Fight.” 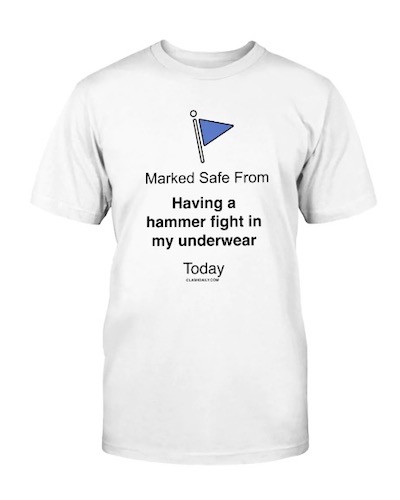 Check out more ClashDaily Exclusives and more Rowdy products in our Clash Store.