If there were an R after Biden’s name, the media would be ROASTING Joe over the little vacation trip he’s taking to the Virgin Islands.

Fox News let us know that Joe Biden will be hopping a plane to ring in the New Year in the Virgin Islands.

It’s fitting that Ted Cruz was the one to point this out.

After all, he was raked over the coals when he (a Federal Senator, and not someone who had any direct role in the running of State services) took a scheduled vacation to Cancun with his kids that happened to correspond with a massive and, sadly, deadly winter storm that ripped through Texas.

To this day, that is held up as some kind of a ‘failure of leadership’ on his part, with no explanation given as to what role a Senator elected to serve in DC has in solving that local crisis.

Joe Biden, meanwhile, is doing that — and worse — by taking a trip to a sunny vacation spot just days after a massive winter storm killed 27 people in and aroud Buffalo.

Here’s how a foreign news site reported the situation the same day Biden’s trip was announced.

The extreme weather stretched from the Great Lakes near Canada to the Rio Grande river along the border with Mexico, creating what the country’s National Weather Service called “life-threatening” conditions which could lead to “frostbite within minutes”.
The storm is set to persist this week, with forecasters warning an additional one to two feet (30 to 60cm) of snow could be possible in some areas through Monday morning amid wind gusts of 40mph. –Inews

So… most of the country is facing serious problems with winter storms… some of the declared emergencies. And Joe Biden took a vacation?

With Joe skipping town at such an inopportunte moment, surely the networks are brimming with stories like this one, right?

But wait, that’s not even the half of it. Joe’s taking a lovely, sunny vacation at the very moment that … a serious transportation crisis has been hitting vacationers, too.

It seems THEY don’t have the same ability to hop a private jet that Joe Biden and Preachy Pete Buttegig have. And that lack of access to private jets that Biden’s crowd takes for granted is causing some real problems among the hoi poli. 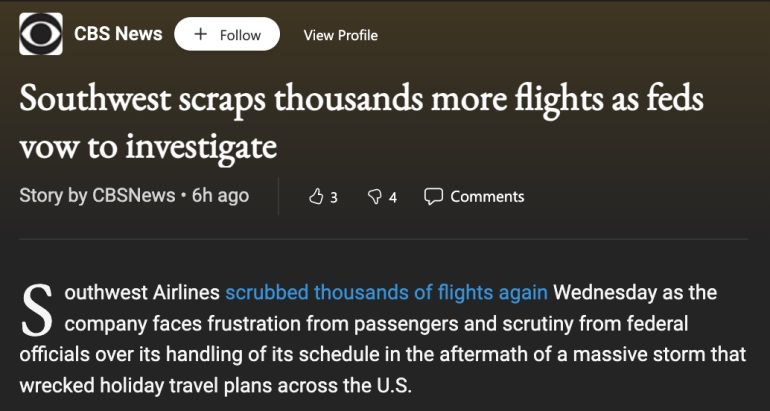 Preachy Pete is on the job. He’s going to scold them into submission.

Transportation Secretary Pete Buttigieg on Wednesday said his department “will mount an extraordinary effort” to ensure that Southwest Airlines meets its obligations to customers after canceling thousands of flights during the holiday season.
Borrow from Your Home, Not the Bank ($25k for $168/mo)
“We’ve never seen a situation, at least not on my watch, with this volume of disruption,” Buttigieg said on ABC’s “Good Morning America.”
“So this is going to take an extraordinary level of effort by Southwest,” he continued. “And we will mount an extraordinary effort to make sure that they’re meeting their obligations.” — Business Insider

Forget the fact that his own government’s arm-twisting about vaccine compliance was one of the factors that forced mass layoffs of pilots. Throw in his pronouncement of bringing ‘equity’ into the airline industry and he should be looking into the mirror for what role HE had to play in this FUBAR situation.

Interestingly enough, Preachy Pete skipped town for a trip to Portugal when the rail unions were preparing to strike. He never got any ritual beatings from a hostile mainstream press, because no such creature exists.

Come to think of it, Joe Biden wasn’t the only one sunning himself in the Virgin Islands.

Mayor Eric Adams on Tuesday defended his decision to take an unannounced vacation last week to the U.S. Virgin Islands, just as a winter storm bore down on the city.
The mayor’s two-day trip on Thursday and Friday was kept under wraps by his staff and came as the storm caused major flooding in coastal areas, including Howard Beach and the Rockaways.
“I was in the U.S. Virgin Islands,” Adams revealed to reporters on Tuesday at his first news conference since returning from the trip Saturday.
…“Every mayor traveled away,” he said. “Nowhere in the city charter does it state that I have to report to the New York City press where my whereabouts are, and I’m not going to do that.”
…“I deserve private time,” he added. “I’m a believer in that. I deserve to walk out of a building without a reporter hiding behind a flowerpot.”
Adams had faced some criticism that he was MIA during the storm and as a house fire killed two children on Staten Island on Friday morning. — WCBS

When a Demcrat does it, there are some very, VERY good reasons for their doing so that ought not be questioned by the little people.

But God forbid Ted Cruz — who has no direct responsibility relating to the running of the Texan power grid — take a vacation with his girls. That makes him a monster.

We know how this game is played.

And that’s why we all know it’s fake news.