A Virginia restaurant co-owned by Top Chef star Brittanny Anderson cancelled the reservation for a private room just 90 minutes before the event for a conservative, faith-based group was about to begin.

The Family Foundation, a Christian non-profit organization that advocates for Biblically-based policies, was left scrambling at the last minute to find a place despite securing the reservation weeks in advance.

A post on the restaurant’s Instagram page stated that Metzger’s “has always prided itself as being an inclusive environment for people to dine in” and has rarely refused service to anyone…but they made an exception on November 30.

They discovered that the booking for a private room was made by “a group of donors to a political ogranization that seeks to deprive women and LGBTQ+ people of their basic human rights in Virginia.” As a result, one of the owners decided to cancel the reservation in order to prevent their female and LGBTQ+ staff from feeling “uncomfortable and unsafe.” 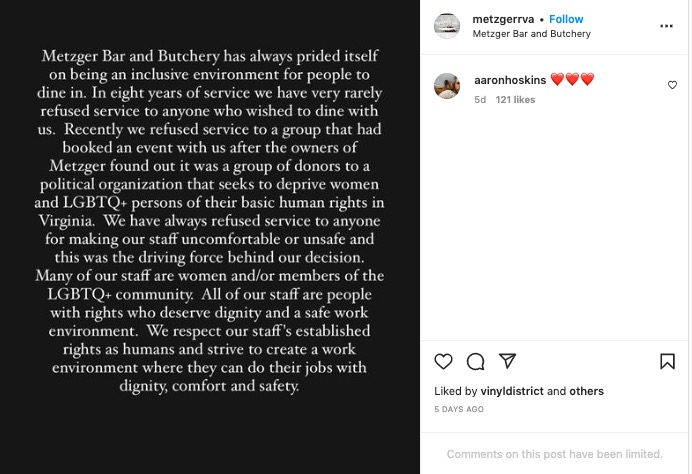 These are the same sorts of people that tell Christians to “just bake the cake” and make the wedding website for the same-sex couple even if it means violating their religious convictions.

Metzger Bar and Butchery in Richmond, Virginia canceled the Christian organization’s booking citing that staff would be made ‘uncomfortable’ and ‘unsafe’ by their presence in the establishment.
The conservative Christian group, the Family Foundation, said they were left annoyed by the last minute cancelation and that it was a ‘double standard of the left’.
The German themed restaurant is co-owned by TV chef Brittanny Anderson who is known for her shows ‘Top Chef’ and ‘Chopped’.
Source: Daily Mail

A flyer for the event explained that the group had organized a “Dessert Reception” in order “to discuss the success and future plans of the Family Foundation.”

Online reactions have been typical. There are the comments like, “Christian bigots are just getting what they deserve”, “Private businesses can do what they want”, and the smug, “Christians defend the baker for not baking the cake, but get upset when they’re not allowed in a restaurant!”

As for the libertarian argument about “private businesses” able to do what they want — it’s illegal to discriminate against Christians because of their religious convictions.

By the way, the White House Press Secretary — and therefore the Biden White House — seemingly agrees that businesses cannot refuse public accommodation to individuals or groups based on their identity. That would include restaurants serving food to Christian organizations.

Diversity Hire Karine Jean-Pierre was responding to the SCOTUS case about First Amendment rights brought by a wedding website designer that has spurred a number of rather remarkable hot-takes.

You can bet that the White House didn’t realize that in opposing the wedding website designer they’d also be opposing Metzger Bar & Butchery’s actions against The Family Foundation.

The tell that this is simply blatant bigotry is because the restaurant wouldn’t dare boot out conservative Jewish or Muslim advocacy groups for holding exactly the same views on marriage and abortion that the Family Foundation has.

The Christianophobes know that they can get away with it and get high-fives from the so-called “tolerant” left for doing it.

On December 1, The Family Foundation’s President, Victoria Cobb, wrote a blog post about what happened titled, “We’ve Been Canceled! Again.”

“About an hour and a half before the event was set to take place, one of the restaurant’s owners called our team to cancel the event. As our VP of Operations explained that guests were arriving at their restaurant shortly, she asked for an explanation,” writes Cobb. “Sure enough, an employee looked up our organization, and their wait staff refused to serve us.”

Oooohhh, so it wasn’t about the restaurant owners taking a pro-active step to “protect” the feelz of the delicate flowers they have on staff — the anti-Christian bigots were refusing to serve the paying customers after a Google search. How very inclusive.

“Welcome to the 21st century, where people who likely consider themselves ‘progressives’ attempt to recreate an environment from the 1950s and early 60s, when people were denied food service due to their race,” continues the post.

“Welcome to the double standard of the left, where some believe Jack Phillips must be forced to create a wedding cake as part of the celebration of a same-sex ceremony but any business should be able to deny basic goods and services to those who hold biblical values around marriage,” she states scathingly.

“Our witness will not be diminished and we will not be silenced,” writes Cobb. “We will speak out when we see this type of religious discrimination occurring in Virginia.”