This would explain why the jabbed seem to take longer to recover from a milder version of the virus.

A thread by one of the authors admits that there was an “unexpected rise” in a specific type of antibody — Immunoglobin G4 (IgG4) — after the third mRNA shot.

The immune response after the booster appears to shift so that the body produces more IgG4 antibodies and fewer of the other antibodies that are more effective at attacking the SARS-CoV-2 virus.

The change could mean that people who have had their three (or more) mRNA shots are more susceptible to COVID infection as well as prolonged — and perhaps more serious — illness once they do contract the virus.

These results are specific to the mRNA shots.

Here is one of the authors of the study explaining the findings.

Re-cap: There are 4 IgG subclasses dependent on the Fc part (so the antigen-binding Fab is the same). However, effector functions (antibody-dependent phagocytosis, complement deposition, cellular cytotox) are different. Also see preprint 🧵👇2/11 https://t.co/joYS7w58Ux

In the peer-reviewed manuscript, relative numbers (panel c) of IgG4 highlight that shortly after 3rd vaccination, about 20% of IgG is IgG4, which is further boosted through breakthrough infections (grey circles) at follow-up (FU) to up to 40-80%. This is very unusual. 3/11 pic.twitter.com/LLufy9MBjj

So what? Fab function is unchanged. We, as many others, saw improved antibody avidity and cross-neutralization after 3rd vs. 2nd vaccination. However, Fc effector functions are indeed deteriorated (!). Next to phagocytosis, we now also report this for complement deposition. 5/11 pic.twitter.com/SZ5n6GHI2L

In one tweet, Schober did try to downplay the attention that the pre-print study is getting among “aNtI-vAxXeRs” by insisting that the mRNA shots have (essentially) been “safe and effective.”

In a later tweet, however, he admits that since the mRNA technology is being explored for use in the treatment of autoimmune diseases and cancer, the increase of IgG4 “clearly requires further investigation.”

Again, Fab functions like neutralization are fully preserved upon class switch to IgG4. So is the class switch irrelevant in terms of consequences on subsequent infections? We don't know. Fc effector functions could be critical for viral clearance (sterile immunity)… 7/11

Given the enormous potential of mRNA vaccines for the fields of infectious diseases, autoimmunity and cancer, the induction of IgG4 antibodies clearly requires further investigation. Deciphering the precise immunological mechanism underlying this class switch will be fun! 9/11

We are also grateful to @BMBF_Bund @Covim_Netzwerk @dfg_public @DZIF_ and @EKFStiftung for supporting this work. Funders had no influence on the study design and data interpretation. Lastly, thanks go to editor @IforRWilliams and our 4 critical, but constructive reviewers. 11/11

Meanwhile, some of the big pro-vax voices out there are clearly troubled by the study. 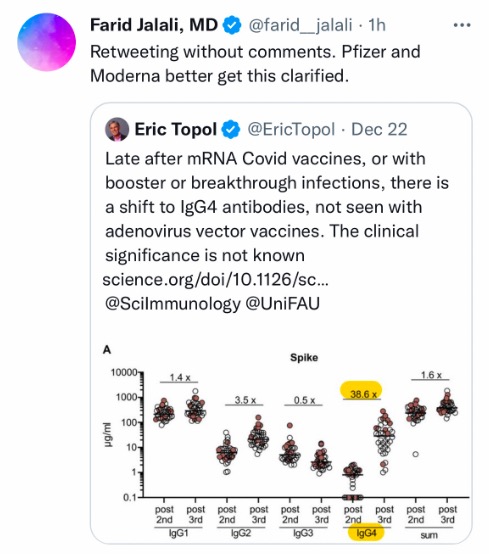 Over the course of the last two days, I’ve read articles and Substack posts about the significance in the immune system’s shift to producing IgG4 post-booster written by doctors, scientists, journalists, and the average Joe just trying to wrap their heads around what the heck is going on.

Here is Substack author Igor Chudov explaining the significance of this study in very simple terms.

Our immune systems are complicated. We do need to fight dangerous replicating pathogens, such as viruses or bacteria. At the same time, we also face harmless inert substances, such as tree pollen, that sometimes cause inflammatory reactions called allergies.
To deal with these harmless substances, our immune system has a particular class of antibodies, called IgG4, that do the opposite of what we are used to hearing: they bind to allergens and tell our immune cells to ignore them rather than cause inflammation.

He then explains that it appears that the mRNA shots are working like allgery shots.

I had many pollen allergies. Every spring was unpleasant. I decided to go to an allergist and take allergy shots, which amounted to repeatedly injecting allergens into me. As a result of these repeat antigen shots, my immune system developed non-inflammatory IgG4 antibodies, which mark pollen as a harmless substance to the rest of my immune system and prevent allergic inflammation and nasty symptoms.
There is something important, though: pollen does not replicate.
It is a good idea not to have inflammation in response to pollen. It is a bad idea, however, to train our immune system to ignore replicating pathogens such as Sars-Cov-2.

Sometimes memes can get the idea across in a way that all the technical language can’t.

A very SIGNIFICANT research paper dropped on 22 Dec which ROCKED even the pro-vax experts! @ichudov wrote a very nice commentary on it here… https://t.co/c2KG8JXD6H

BUT, for those of us who are more visually inclined…
This 2 mins clip explains it all!! pic.twitter.com/A0YHwYT3MG

3. Mr “Pro-Vax” Topol himself is baffled
“The clinical significance is unknown” pic.twitter.com/P8FNy6fzM0

Berenson concluded his article on Substack with this:

…[I]f the mRNAs are truly generating broad “immune tolerance” to a virus that continues to mutate its spike and make all our anti-spike protein antibodies less potent (as Omicron has), the long-term consequences are potentially frightening.
At the least, this paper offers more evidence that mRNA booster campaigns need to be immediately restricted. And scientists need to examine whether people with high post-vaccination levels of IgG4 antibodies are becoming sicker than people with lower levels. If they are, we need an immediate effort to look for tools to reverse or slow switching to IgG4 at the cellular level.
Physicians will also have to be on the lookout for a spike in IgG4 related disease, which generally manifests as autoimmune disorders and is usually fairly responsive to steroids.
Source: Unreported Truths (Dec. 27, 2022)

It’s important to note that this doesn’t mean that boosted people have no ability to mount an immunological response if they are infected by COVID-19, it just means that it may be a longer, lingering illness and put a strain on their immune system. In addition, it potentially puts them at risk for organ damage from the virus because their immune system is taking a longer time to fight off the virus.

What does that mean long term for a virus that will soon become an endemic virus like the flu? Who knows. Only time will tell.