As hard as the spin doctors might try, it’s getting harder and harder to put lipstick on this pig.

Joe Biden made a federal case — literally — out of the mishandling of classified documents in an attempt to finally stick a fork in Trump’s political career.

He went on 60 Minutes, and blasted Trump. How could that possibly happen? How anyone could be that irresponsible?”

And then, like some kind of crazy whack-a-mole game, classified papers started showing up all over the place that Biden had somehow failed to comply with the very same letter of the law on.

Each time Joe and his PressSec (spokes-muppet) dutifully repeated the line about everyone knowing how he takes classified documents seriously. They said it so many times that ClashDaily turned it into a meme: 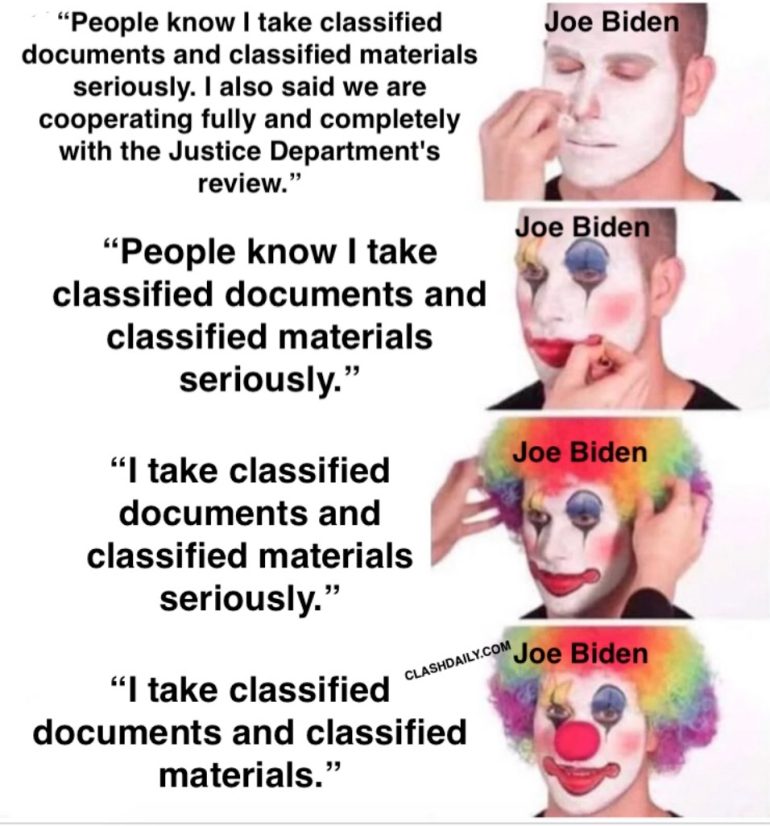 (Go ahead and share it if you want. That’s what memes are for.)

Seeing as Biden is a guy who liked to frame Trump as a national embarrassment, here’s what a paper halfway around the world in India had to say about him:

Officials from the US Department of Justice found six more classified documents during a search of Joe Biden’s family home in Delaware this week, the president’s personal lawyer said in a statement Saturday.
“DOJ took possession of materials it deemed within the scope of its inquiry, including six items consisting of documents with classification markings and surrounding materials,” the statement from Biden lawyer Bob Bauer said. –HindustanTimes

Giving further credence to the meme, at least some of these documents go back to his days in the Senate.

This drip-drip-drip of revelations comes at a bad time for Joe. Not only is he finally being held accountable by a GOP with scores to settle after two years of Joe’s heavy-handed partisanship, but we are also coming up on the SOTU, not to mention the inevitable Presidental nominations for what Joe still seems to think will be his re-election campaign.

Joe might think he’s still got gas in the tank, but others in his party may see it differently. Ron Klain picked an interesting time to move to greener pastures that may or may not have anything to do with damage control and shifting political winds.

The official answer is ‘no’, but you would expect that to be the public response in either case.

Klain’s departure would come at a difficult time for Biden, with a special counsel investigating his handling of classified information after his time as vice president and with the administration and the president’s family facing renewed scrutiny by the GOP-controlled US House of Representatives. An official familiar with Klain’s plans said his decision to step down is not related to the investigation underway about classified documents found at Biden’s private office and Delaware residence, with the decision being made before the special counsel was announced. –ABC7

The Sunday shows were more pointed in their criticism of Biden.

Several of his old friends in the senate threw him under the bus.

Manchin and Sen. Tim Kaine (D-Va.) said previously they believe the DOJ made the right decision in appointing an independent special counsel to investigate Biden’s handling of the documents, with Manchin calling Biden’s situation “extremely irresponsible and disturbing,” he told Fox News Digital on Friday. –Forbes

Forbes cut that quote short. In the originaly Fox version, it continued:

“To put those in unsecure spaces is irresponsible,” Manchin said. “I think he should have a lot of regrets.” — FoxNews

The Senate Majority whip, Dick Durbin, went further. He worked hard to put a ‘better than Trump’ spin on it, but he explicity said Biden had lost the Moral High Ground.

“Of course. Let’s be honest about it,” the Illinois Democrat told CNN’s Dana Bash on “State of the Union” when asked if the president had “lost the high ground on this notion of classified information being where it shouldn’t be.”
“When that information is found, it diminishes the stature of any person who is in possession of it because it’s not supposed to happen,” Durbin said. “Whether it was the fault of a staffer or an attorney, it makes no difference. The elected official bears ultimate responsibility.” — CNN

You know it’s gotta be bad when someone as shameless as Da Nang Dick start calling out members of his own team for losing the moral high ground.

For anyone wanting to give that knife a twist… we’ve got some Let’s Go Brandon swag available at our ClashDaily store.

Be sure to thank the readers who have been buying from our store. (And readers who don’t use ad blockers while visiting our site.) They have been helping keep this content free for our readers without hiding our best stuff behind any of those annoying paywalls.