President Obama delivered a State of the Union speech before both houses of Congress on Tuesday night and that may be the only accurate fact that can be attributed to his address. The reality of Obama’s somewhat disconnected Capitol Hill offerings had more to do with what he imagined that he accomplished in his self-imposed 2013 year of hell, than the solutions the nation needs to go forward in 2014.

Take for example his assurance he gave to the American people about the supposed “Year of Action” which promises to be an all hands on deck approach to pushing his 2014 presidential agenda. Well, if all hands on deck is anything like his non-existent military rescue response to saving the lives of four Americans in Benghazi on September 11th, 2012, nothing much will come of his uttering’s.

He used an imagined bold stroke in raising the federal minimum wage for federal contract workers from $7.25 to $10.10 an hour. For many liberals and progressive socialist types this act is intended to be an in your face to Republicans in the House of Representatives. The president’s supporters felt confident that the American people will feel a renewed faith in the feckless behavior the president has shown in dealing with the economy and his newest pursuit: “Income Inequality.”

At the State of the Union the president declared, “In the coming weeks, I will issue an executive order requiring federal contractors to pay their federally funded employees a fair wage of at least $10.10 an hour.”

Now comes the reality. According to Fox News, the actual impact is less than noteworthy. His use of the executive order pen will actually only impact, close to “10 percent of those workers, roughly 200,000, who might be covered by the higher minimum wage,” reported Fox News.

The news just gets better and better…Not!

Fox News suggests that the increase would not take effect until 2015 at the earliest. For those workers who are employed on existing federal contracts the executive order will have no effect whatsoever. Let’s say that the workers’ current contract is renewed, those same workers will still be exempt from receiving any pay raise under Obama’s new executive order.

So much for “Income Inequality” when it is Obama talking. So what does it mean then for workers who are unemployed? What is your or your family’s state of your union? Was there anything meaningful resonating from Obama’s speech of hopeless and change challenged rhetoric?

As the president spoke, he seemed an ocean away from his second-term win over Republican challenger Mitt Romney. The bloom has left the rose from his State of the Union 2013 speech as had his haughtiness. Instead his words were terse and combative, according to the Washington Post. He advised congress that he would, “veto new Iran sanctions, and warned against further moves against his health-care law.”

Obama even demanded action on a series of proposed economic measures he had raised for congressional action but had been kicked to the curb by House Republicans.

There is a beacon of light that conservative Americans can take from this truth challenged leader. This light can be actually found in Obama’s own coined “Year of Action” phrase. This should truly become the clarion call for all Conservative Americans who believe in the essential protections and freedoms guaranteed under the U.S. Constitution.

The president has made nearly every imaginable attempt during his five years of unremarkable achievements to cement into the annals of history what Americans are not going to seek in their elected leaders. From the failed Obamacare rollout and its haunting devastating impact upon families, businesses and the economy to his embracing of illegal aliens pouring across American borders, citizens know what to stand against.

The State of Dis-Union is a roadmap which can guide Americans to what bumps in the road to avoid when candidates begin spouting the same phrases that the president used in his State of the Union. When a candidate for congress, the statehouse or other offices speak about “Income Inequality” you know the candidate means fascism, socialism, and Obamanism.

When a congressional candidate says “economic growth, corporate profits and stock prices have rarely been higher and those at the top have never been higher,” then wait for the other shoe to drop. Obama’s spirit is in the mix and it means once elected the Democrat or Rino-Republican official will want to strip more money from your earnings, create bigger government and further transform America into a socialist state.

So be a conservative warrior and don’t run from Obama’s State of the Union speech, but use it as a guide for you to triumph against in 2014. Use his inaction and moral political bankruptcy to fuel America’s conservative Year of Action. When next year rolls around, Obama’s current dis-union will have helped elect a GOP controlled U.S. Senate. Conservatives in America will then be able to celebrate a successful conservative 2014 state of the union. 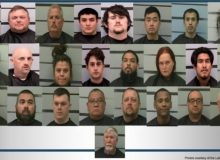