On Tuesday, Mike Dickinson, the Virginia Democrat who wants the House seat currently held by Rep. Eric Cantor, R-Va., despite not being on the ballot, issued a tweet suggesting that Sen. Ted Cruz, R-Texas, South Carolina Gov. Nikki Haley and columnist Ann Coulter be killed.

Another day, another F, Marry, Kill. @nikkihaley @AnnCoulter and @SenTedCruz it's all fun and games. Who would pick? This one is easy

This is the second time Dickinson has engaged in the Twitter game where players are given a list of well-known people and then asked to state whether they would have sex, marry or kill the person. In mid-May, Dickinson issued a similar tweet listing former Alaska Governor Sarah Palin, conservative columnist Michelle Malkin and Elisabeth Hasselbeck. 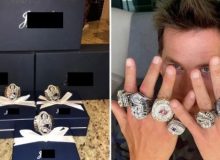