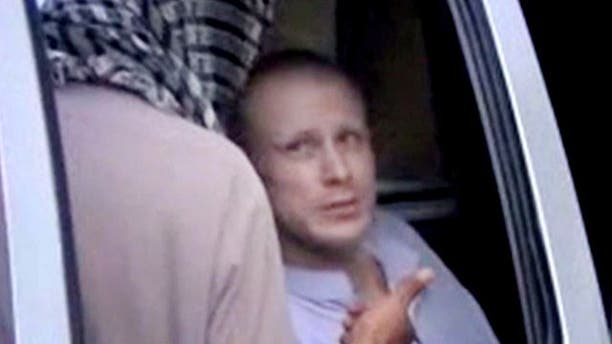 We all knew there was something terribly wrong with the negotiations conducted in secret and without the consent of Congress, that freed 5 of the most evil men on the earth to continue wreaking havoc on the freedom loving world.  But it didn’t stop at their release.  Insult to injury continued when we watched Obama embrace a man who pronounced blessings and thanks to our enemies for taking care of their son and making him feel comfortable amongst them.   Well, Bowe Bergdahl felt so at home with terrorist he decided to become one of them.

Fox New’s James Rosen, being the true journalist that he is, has obtained documents that state that Bergdahl while in captivity not only converted to Islam but declared jihad.  And this is the man that our president thinks is so valuable that it is worth the risk of releasing 5 major terrorist that’s only goal in this life is to see America toppled and brought under the control of Islam.  If this is not grounds for the impeachment, then what is?

U.S. Army Sgt. Bowe Bergdahl at one point during his captivity converted to Islam, fraternized openly with his captors and declared himself a “mujahid,” or warrior for Islam, according to secret documents prepared on the basis of a purported eyewitness account and obtained by Fox News.

The reports indicate that Bergdahl’s relations with his Haqqani captors morphed over time, from periods of hostility, where he was treated very much like a hostage, to periods where, as one source told Fox News, “he became much more of an accepted fellow” than is popularly understood. He even reportedly was allowed to carry a gun at times.

The reports detail discussions of prisoner swaps and other attempts at a negotiated resolution to the case that appear to have commenced as early as the fall of 2009.

At one point — in late June 2010, after Bergdahl succeeded in one of his escape attempts — the Haqqani commanders constructed a special metal cage for him, and confined him to it. At other points, however, Bergdahl was reported to be happily playing soccer with the Haqqani fighters, taking part in AK-47 target practice and being permitted to carry a firearm of his own, laughing frequently and proclaiming “Salaam,” the Arabic word for “peace.”

The families who lost their children in honorable service to rescue Bergdahl are the ones who deserved the Rose Garden ceremony and the man that needs to be released is the one sitting in a jail in Mexico.  It is sickening to recount how every play this president makes has been to weaken America and bring her to her knees.  Is it incompetence? No, it is calculated treason.