Is this the same guy who testified a fake story and started “Hands up, Don’t Shoot”? Check out this new evidence via Conservative Treehouse:

Before getting to the Dorian Johnson aspect I just want to highlight something Prosecutor McCulloch stated in his press conference:

The Grand Jury watched all the media interviews of witnesses prior to hearing their ‘in person’ grand jury testimony.

In my opinion this simple fact is what was so devastating to Dorian Johnson, Piaget Crenshaw and Tiffany Mitchell.  They simply lied to the media.  This is also why the media is standing jaw agape trying to reconcile the Grand Jury outcome.

One of the more interesting elements noted by the physical evidence, and DNA testing, relates to confirming the Dorian Johnson bracelet we first identified back in August.

When Dorian was aiding Mike Brown robbing the Liquor Mart, we noted the CCTV showed him with a yellow or gold bracelet on his right wrist.

Later, as we identified him in interviews, that bracelet was missing.  We scoured through video, published media pictures, and we found it at the car.

At least we thought that was it, but our pictures were sketchy.  So we were not 100% sure.

DNA testing also reflected that both Darren Wilson and Dorian Johnson’s DNA were present on the bracelet(s).

What does that mean?

As we shared back in August, it means Dorian physically participated in the assault of  Officer Wilson and was not the innocent victim/witness he claimed to be.  This also gives him motive to lie – as he did to the media.

In addition, and again as we surmised, the Dorian participation would have been witnessed by the driver of the White Vehicle noted to be blocked by the position of Officer Wilson’s SUV.

That witness is Witness #40.

Witness #40 who was in the car blocked by the police SUV, was the closest person to the entire incident and witnessed every single aspect from beginning to end.

Fortunately Witness #40 did not live in Canfield Greens and was not subject to the community peer pressure.

~ SO DORIAN JOHNSON PARTICIPATED IN THE ATTACK UPON WILSON ~

LOOK What This FAT PIG Did In THIS State- LOCK HIM UP NOW!!!
AFF 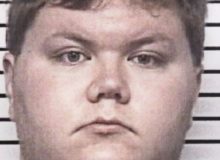 BREAKING: Biden To Let China INVADE Country With ZERO Consequence- THIS IS GOING TO GET BAD!!!
AFF

Leftist Entities Are Responsible For Supply Chain Crisis
The Lid

How You Can Help Destroy The Green New Deal With Six Little Words
October 22nd, 2021 The Lid

Why does the Justice Department view a Halloween costume as racial discrimination?
October 23rd, 2021 Liberty Unyielding