Hillary thinks that the public has no business knowing who funds the DNC — do you think you have a right to know? Or do you agree with her?

The host committee for the Democratic National Convention wants to keep its donor list under wraps until after the convention even though a state open records agency has ordered its release.

Lawyer David Pittinsky said those efforts were still ongoing even though the four-day convention starts Monday.

The host committee set out to raise about $60 million from private sources, but secured a $15 million line of credit from the city as a safety net. The committee must therefore file financial updates with the city.

Independent journalist Dustin Slaughter considers those filings public, and the state’s open records agency agreed with him last month. He said his interest in the event’s potential cost to the city stems from the fact the pope’s visit last year ultimately cost the city $8 million.

‘In light of the fact that the host committee is still short on its fundraising goals, that $15 million (loan) could still come into play. The public has a right to know what’s happening behind the scenes,’ Slaughter said after Thursday’s hearing.

Hillary Says, 'Public Has NO Right To Know Who's FUNDING DNC Convention' -- Do YOU Agree?

BREAKING News Out Of ALABAMA- THEY GOT HIM AFTER YEARS OF TORTURE- HUGE!!!
AFF 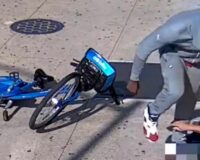