Investors are getting the message! ‘America Is Open For Business!’

Now that HE is setting policy, we can see what effect his ‘war on over-regulation’ is having.

We can also see the effect of transitioning to bilateral trade agreements rather than trading blocks.

The markets had expected Democratic presidential nominee Hillary Clinton to win the 2016 election. Stocks fell for several days straight after FBI Director James Comey announced a re-opening of his agency’s probe into Clinton’s email server on Oct. 28. The markets rallied again on Nov. 7, the day before the election, after Comey announced that his investigation had concluded there were no new grounds to prosecute Clinton.

On Election Night, as Republican nominee Donald Trump began to look suddenly like the winner, Dow futures dropped sharply, by 900 points. But soon after markets opened the next day, the markets began to rally, and have not looked back. Led by Goldman Sachs — which has several alumni in prominent positions in the incoming administration — the Dow rose nearly 1,700 points from November 9 until December 20. It hovered near 20,000 for weeks before finally breaking through the 20K mark.

History will note the gains on President Obama’s watch, but analysts are already calling the post-election rally the “Donald Trump bounce” or the “Trump bump.” As of January 25, 2017, Dow 20K is undoubtedly a Trump administration milestone. —Breitbart 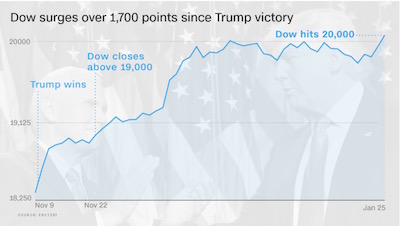 Expect the naysayers to credit Obama for this.

The TIMING for the sharp rise tells us differently.

Even investors are calling it the ‘Trump Bump’.

America is BACK in Business!