They thought they caught Trump in a mistake. They wound up correcting one of their own.

These are the same news media that displayed their bias in the Primaries.

Neglecting (refusing?) to report Trump’s massive rally numbers especially in the context of Hillary’s ‘rallies’ that could almost meet in a janitor’s closet.

Which leads us to the back-and-forth over the Inauguration numbers.

The media remained silent on the crowd size numbers when it was clear that Trump was crushing Hillary in this area. But late last week the media finally reported that crowd size does matter. CNN (Fake News) reported that President Trump’s crowd size was much smaller than President Obama’s crowd size in 2009, and CNN provided two pictures to show the difference.

However, the pictures in the article show the crowd size for Obama when he was speaking during his 2009 inauguration with the crowd from Trump’s inauguration approximately 3 hours before Trump spoke.

CNN’s report was another of their ‘Fake News’ lies. The photos used in their post were not comparing apples to apples and President Trump’s Press Secretary pointed this out on Saturday in a special press conference. Trump’s crowd was huge and every bit as big as Obama’s crowd in 2009. Also, in CNN’s article they say that Obama had 1.8 million people in 2009. This is now refuted and is more likely closer to 800,000.

Later CNN’s report was proven false by their own reporting. CNN released a gigapixel of President Trump’s Inauguration and the areas they show as empty in their article from their January 21st report were filled to the brim in their more recent picture which was taken at the time of Trump’s speech during the Inauguration ceremony. — Gateway Pundit

What story did the ‘objective’ media tell? Claiming to be an apples-to-apples comparison of Trump’s speech and Obama’s, they gleefully reported YUGE empty spaces at an ‘under-attended’ inauguration. 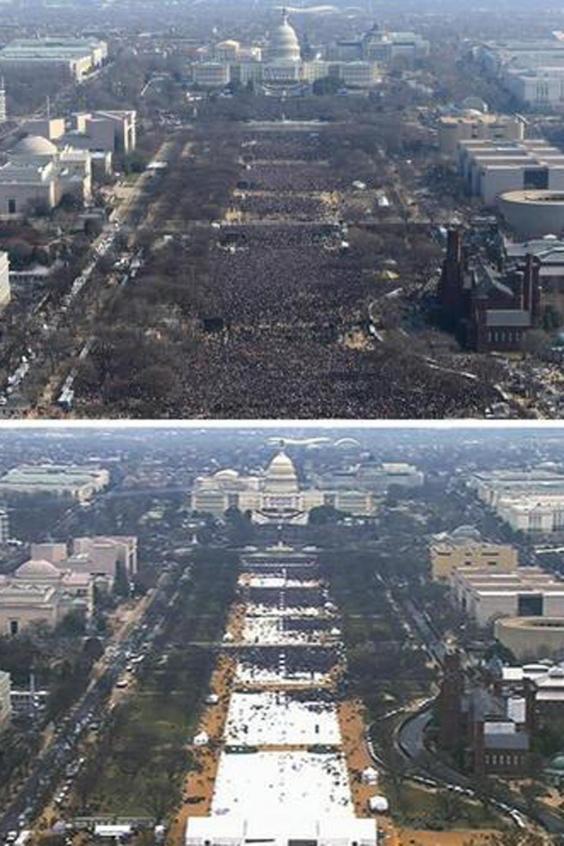 Even Anderson Cooper conceded that, photos looking toward the crowd from the White House did appear to be more full. One might reasonably assume that he was not deliberately trying to ‘out’ anyone in a lie.

This is a screen grab of CNN’s Gigapixel shot:

For all their frothing about ‘alternative facts’… it looks like THEY were the ones lying.

Because when you look, it doesn’t actually look ’empty’ anymore, does it?