Will CNN ever learn? A story about Nancy Sinatra’s tweet got the singer upset and she called them out for it…

She DID respond to a tweet asking how she felt about Trump having his first dance as President to her father’s song, ‘My Way’.

She chastises CNN for twisting her words and making a story out of nothing.

News broke this week that President-elect Donald Trump and his wife Melania will dance to Frank Sinatra’s “My Way” as their first dance at the Liberty Ball on Friday.

CNN quoted what seems to be a now-deleted tweet from Nancy Sinatra that read “Just remember the first line of the song” in response to a question about her father’s song being used during the inauguration.

…It would seem Sinatra isn’t denying she commented about the song’s first line – though that tweet can no longer be found on her page – rather, her issue seems to be CNN’s take on the tweet.

She also wrote, “I’m not sure why this became such a big deal. It was really just a joke.”

When a fan suggested on Twitter that she must be upset to hear that her father’s single is being used, she replied, “Actually I’m wishing him the best. A good president helps the entire world. I don’t believe anyone tries to be a bad president.”
Read more: Fox News 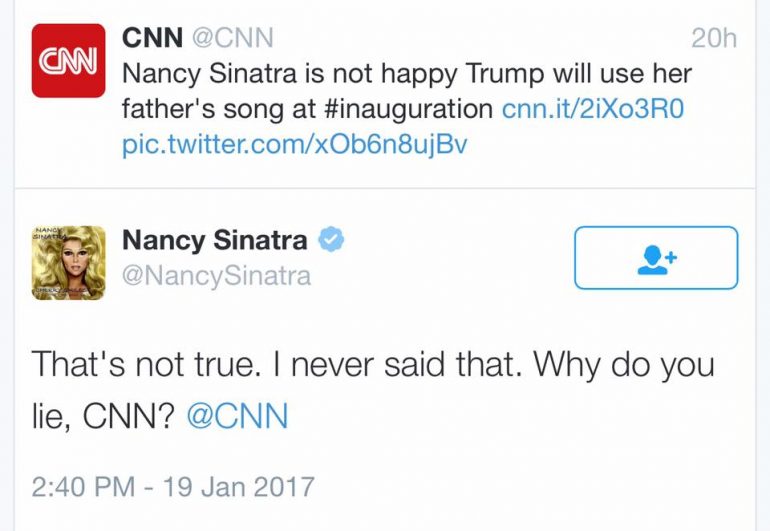 And, although she’s not a Trump supporter, she did tweet this:

When our President does well, America wins!