First, there was the murder of his pregnant girlfriend.

Killing a woman is bad. A pregnant one is worse. But when she’s your own girlfriend??? That’s cold.

That’s the crime he was wanted for when Lt. Deborah Clayton tried to apprehend him.

The manhunt developed, and they eventually found him — armed and wearing body armor.

Here’s a photo of his weapons:

These are the weapons found by @OrlandoPolice when they captured Markeith Loyd. Latest at 10 pm on TV 27. pic.twitter.com/ZmSCqaaaGl

Although police were prepared for a gun battle, that did not happen.

Mina said Loyd dropped the guns, but still resisted arrest as they apprehended him.

“We knew he had body armor, we obviously knew he had weapons and obviously not afraid to use those weapons, and I thought this would end up in a much different situation,” Mina said.

The chief said the first person he called was Clayton’s husband.

“He was relieved and happy, but upset to learn (Loyd) was arrested around the corner from Debra’s mom’s house,” Mina said. “We’re very excited a cop killer and someone who’s wanted for the murder of Sade Dixon is off the streets.” —WFTV

In a nice piece of poetic justice, Police brought him in wearing the same cuffs Lt. Clayton was carrying when she was murdered.

Adding insult to injury, the punk got mocked during his Perp walk, as he walked out wrapped in bandages.

Don’t you wish you turned yourself in a week ago? You have anything you want to say for yourself?

Are we supposed to feel SORRY for a guy accused of murdering two women (one pregnant, the other a cop) who put on TACTICAL GEAR and grabbed his guns when the police show up?

You got beat up, sure. But your other option was NOT resisting arrest and murdering Lt. Clayton the week before.

The only friends you will have left are some reflexive cop-haters at BLM.

And even THEY will have trouble justifying YOUR sorry ass.

Especially if they see photos of the women you are accused of murdering: 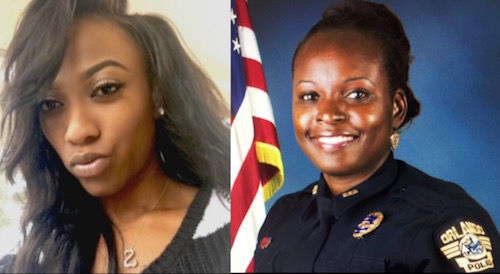