Guns and schools have been a hot topic in recent years. Is her answer the right one?

Democrats, who straight up HATE guns generally, and ESPECIALLY in the context of schools pitched their usual ‘gotcha’ questions to his Education pick.

During the hearing DeVos, who said she would take a salary of just $1 if she is appointed, was asked by Sen Chris Murphy: ‘You can’t say definitively today that guns shouldn’t be in schools?’

She responded by citing a school in Wyoming that had to ward off bears, and said that there ‘is probably a gun in the school to protect from potential grizzlies’.

But she continued: ‘If the question is around gun violence and the results of that, please know that my heart bleeds and is broken for those families that have lost any individual due to gun violence.’ –DailyMail

She didn’t get into the weeds in trying to articulate the deterrent value of an armed staff at school on hand to protect our kids. (Whether that is police, or trained teachers.)

They wouldn’t have listened anyway, and you can bet they were fishing for juicy sound bites.

But she cited an actual example of a natural threat faced in schools today.

Who can claim bears aren’t a real safety issue, where they exist? Seriously… it’s even bled into pop culture: 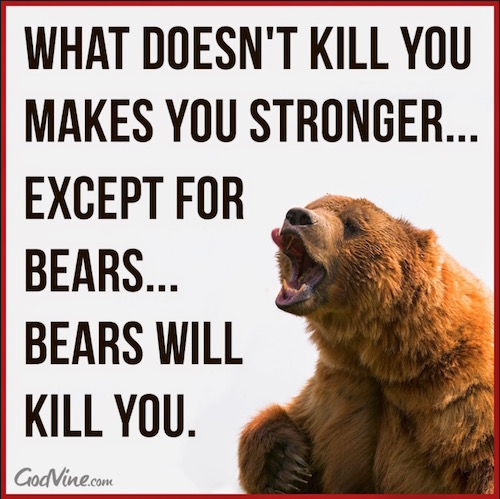 Their argument is ‘but… the safety of the children’.

Her answer was ‘has been protected from bears by guns’.

And you do NOT want to wait for ‘help to arrive’ when a bear is charging… it will not end well. (Exhibit: A)

You KNOW the anti-gun crowd will try to spin this as ‘silly’.

Does that take the teeth out of their anti-gun argument or no?

Was her answer the Right one for this question?