Rep. John Lewis (D) believes that the Russians gave Trump an advantage and therefore he’s not the ‘legitimate’ President. Piers Morgan just called that a great big load of CRAP.

Piers Morgan’s really been on a roll lately.

Using the backdrop of Martin Luther King Jr. Day and Inauguration Day on Friday, Piers Morgan sets the record straight on the behavior of the anti-Trump crowd.

They’ve used bully tactics to have Andrea Bocelli and Jennifer Holliday decline to perform as we celebrate the swearing-in of our 45th President.

But it is the behavior of Rep. John Lewis and some of his fellow Democrats that Morgan finds ‘deplorable’.

There is no more serious charge to level at a presidency, or indeed to the American democratic system itself.

Lewis, 76, knew exactly what he was doing.

He is one of the longest-serving members of Congress, taking office in 1987.

He is also a civil rights hero himself, a man who had his skull fractured by state troopers as he marched with Dr King from Selma, Alabama to Montgomery, the state capital, in 1965.

Lewis has spent the past three decades campaigning against injustice.

So he was fully aware that by saying he doesn’t believe Trump is a ‘legitimate president’, he was lighting the touch-paper for a new round of frenzied Trump-bashing in the lead up to his inauguration.

Lewis fanned the flames even further by adding that he would not be attending the ceremony by way of protest, the first time he has not attended a presidential inauguration in his 30-year political career.

Well, that last bit is not exactly true.

Lewis has made it a rule to not attend Inaugurations for ‘illegitimate’ Presidents.

Turns out John Lewis is a damned liar, too. He appears to skip inaugurations of Republicans, generally ? pic.twitter.com/1lm8TOjO2L

Trump responded to the ‘Illegitimate President’ claim and Lewis’s intent to boycott the way Trump ususally does… via Twitter: 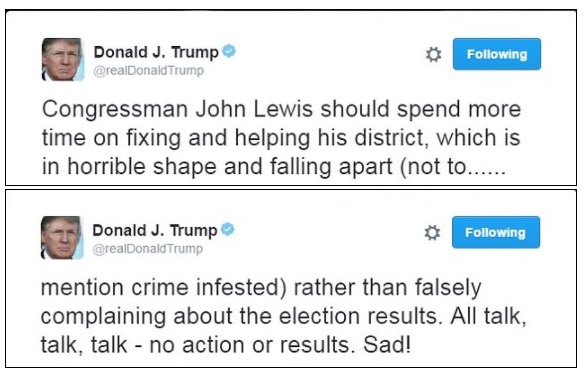 The jibe wasn’t about Rep. Lewis’s civil rights activism, which is laudable.

It is certainly aimed at the ‘results’ (or lack thereof) of Congressman Lewis’s effectiveness as a representative of Georgia’s 5th District for 30 years.

The 5th District has higher unemployment, poverty and crime rates than both national and state averages.

..I’m sorry, Congressman, but it doesn’t matter how brave you were at Selma back in the ‘60s – and let me be very clear again, Lewis was incredibly brave – what you said this week is very damaging to your country…

…The sustained campaign right now to delegitimize Trump’s presidency before it’s even started is not just a disgraceful attack on Trump, who is quite capable of defending himself without my help.

It’s also a disgraceful attack on American democracy and freedom.

As Franklin D. Roosevelt said: ‘On each national day of inauguration since 1789, the people have renewed their sense of dedication to the United States.’

Friday should be a day when the country comes together, not a day when it splinters even further apart.
Read more: Daily Mail

Piers Morgan got it spot on.

And it’s disgusting that he’s doing it.

The irony is that for all the talk about the ‘Russians’ interfering in our democracy, this continued splintering by the Left is doing more than Podesta’s emails ever could.