This video DESTROYS the narrative that President Trump’s Executive Order was a ‘Muslim ban’. You MUST see this!

Paul Joseph Watson slams the protesting leftists and stumps them with FACTS:

George Soros is bankrolling these protests through his ‘Open Society Foundations’. He is an activist and a rabid progressive.

If you don’t know much about him, you should check out this ClashDaily article. He’s pretty ‘Deplorable’.

The Media (D) continues to push that it’s a ‘Muslim ban’ despite the largest Muslim nations not being subjected to the travel restrictions.

The Media (D) was silent on Obama’s similar ban, and that these were the list of countries that the Obama administration had identified as heightened threats.

But hey, why would the Media (D) start telling the truth now?

Sure, Obama has banned Muslims several times in his 8 years in office, dropped tens of thousands of bombs on Muslims, armed Saudi Arabia to fight Yemen, and armed the jihadists that led to the Syrian civil war and the refugee crisis, but he meant well.

President Obama gets a pass because he’s a Democrat, and President Trump is crucified because he has an (R) after his name.

London’s Muslim mayor says that terror attacks are just ‘part of living in a major city’.

Canadian Prime Minister Trudeau says that ‘Diversity is our strength’ and refugees are welcome in Canada. Canada can’t handle the influx of refugees it’s taking in now leaving many wanting to go back to the refugee camps in the Middle East. 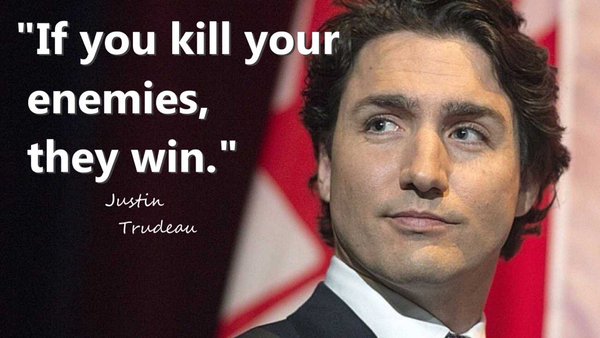 (I’m told that Canadians don’t understand it either.)

This travel restriction is to secure our borders, something that is long overdue.