And the Media (D) is silent. It must be that when a woman says she wants to ‘grab her by the p*ssy’ it’s NOT news.

I’m sorry, I lost my head there in my anger.

Brigitte Gabriel is an outspoken opponent of the ideology of Islam. She is also the founder of ACT For America.

To call yourself ‘feminist’ and ‘pro-Sharia’ and attack Ayaan Hirsi Ali is just vile.

No big deal though. It's not like members of Linda Sarsour's religion already took part of Ayaan Hirsi Ali's genitals or anything pic.twitter.com/uaCMcwGSyN

Yes indeedy. The ‘pro-Sharia’ ‘feminist’ just said that she wanted to take away the vagina of a woman who suffered FGM.

Hey, Sarsour: Islam already partially did that… isn’t that enough?

Here’s a bit more about Ali:

Ayaan Hirsi Ali, a Somali-born, Dutch-American, routinely calls for a reformation of Islam, asserting that “we cannot get away from the reality that there is something within Islam that inspires, incites and mobilizes millions of people to engage in what our president euphemistically calls ‘violent extremism.’”

In 2004, Ali worked with Dutch filmmaker Theo van Gogh on a highly contentious short movie “Submission” regarding the subjugation of women under Islam. Death threats against the pair ran rampant and Van Gogh was soon murdered in the streets of Amsterdam, a note pinned to his body promising that Ali would be next.

Now a fellow at Harvard’s John F. Kennedy School of Government, Ali, whose latest book, “Heretic,” was released last year, continues to rail against what she sees as the injustice of Islam.
Read more: Fox News

If you think that ‘feminist’ and ‘pro-Sharia’ are incompatible, you’re right!

Guess who explains it?

Ali is an articulate, intelligent woman who speaks out against Islam’s oppression of women– because she actually is pro-woman.

And she’s outspoken. So outspoken that she lives under an Islamic Fatwa calling for her death because she’s an ‘apostate’. The fatwa was issued when she was working on the film with Theo Van Gogh, and it was pinned to his body with a knife after he had been shot 6 times and was nearly decapitated. #Classy

But, hey, I’m sure that Sarsour condemns that. Otherwise, she’d just be a deplorable hagfish.

Or does she think, ‘What’s a little fatwa among infidels?‘

Which woman do you think is more pro-woman?

The one who actively fights against oppression or the one who marches with Madonna?

Let’s end with one more quote from Ayaan Hirsi Ali… 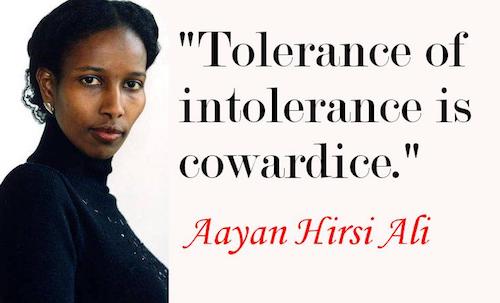