Strong Leader? Petulant child? Which do YOU think Obama will be remembered as?

Remember how the Media (D) climbed all over each other to skewer Trump for disagreeing with the CIA?

This time, Obama got the worst of what the CIA had to say. 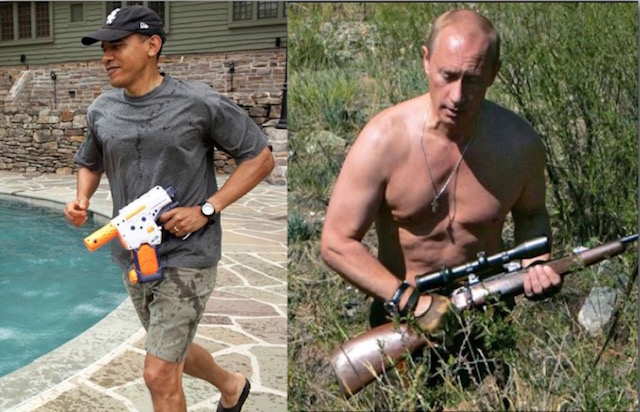 Who's More 'Adult' In This Exchange... Obama or Putin?

With that precedent set, will the Media (D) accept this as ‘gospel’? Or will they spin new excuses for their beloved Obama?

And now a veteran CIA agent has praised Putin for deferring his decision and says the White House is just eager to punish Russia and went too far in expelling the diplomats.
In an interview with Russia Today, the former spy Philip Giraldi said: ‘There is a broad consensus also in the media and in Congress to take harsh steps against Russia, and I think Obama saw an opportunity in this.

‘The problem is that the consensus is very much going in the direction of ‘we have to punish Russia.’ And this is coming from Congress, the media, and the White House, and particularly being pushed by the Hillary Clinton camp in the Democratic Party.

‘But I think Putin behaved like the only adult in the room in terms of his deferring any kind of action as a response to this and I think Trump is basically holding out his hand, saying “We can work our way through this.”‘

The comments from the CIA agent come as a plane carrying the 35 diplomats arrived back in Moscow this morning after leaving Washington last night. —DailyMail

It’s hard to argue with the CIA on this one. What do you think?

We think Obama’s a Pussy, and should go back to coloring. Maybe read a self-help book. There may still be time to make a man of himself. Too late for America, true. But it might do him some good PERSONALLY.

(And then we won’t have to hear him piss and moan all the time!)

We’re thinking he should start with these: