‘Intelligence specialist.’ Not even kidding. What did she THINK was going to happen?

Intelligence Specialist 2nd Class Janaye Ervin is a reservist on active duty with the Pacific Fleet in Pearl Harbor. On September 19th she was in uniform and refused to stand or salute the flag during the national anthem. This was no misunderstanding, she made her intentions perfectly clear on her Facebook page.

…The U.S. Navy didn’t take too kindly to one of their sailors trying to drag their national anthem and flag into her Black Lives Matter nonsense. Ervin has lost her security clearance because of her flag-hating attitude. The Navy also reportedly “threatened” her with jail time for violating the Navy Uniform Code of Military Justice, which states that she could be punished for disobeying a lawful general order.

The Navy’s protocol handbook states that all in uniform must salute during the anthem. They must also face the flag, or face the direction of the music if the flag is not visible.

Rather than take responsibility for her mistake, Janaye Ervin has doubled-down and has reached out to the media to try to put political pressure on the Navy to allow her to continue to disrespect our country while serving the same role for the U.S.Navy.

Janaye Ervin wrote, “The Navy has decided to punish me for defending the Constitution and has taken away my equipment I need to do my Naval job. It was my pleasure serving my country, I love it dearly, that is why I must do this for you. I will keep you all posted on what happens next!” 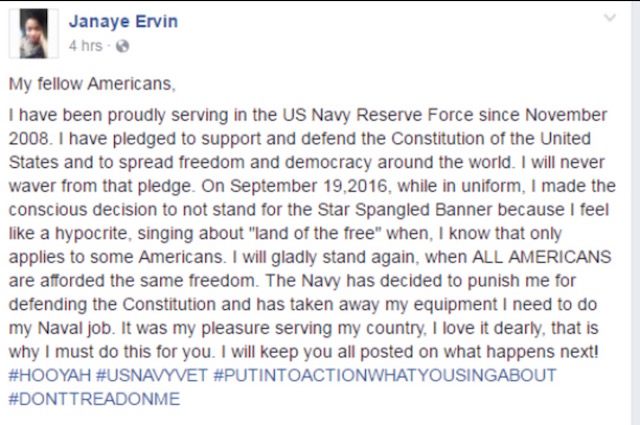 Nobody MADE you make a public statement… Political Position, no less… IN UNIFORM.

That’s on YOU. Congrats.

If you’re going to represent ‘Military Intelligence’ it might be nice if you display some, well, Intelligence. That’s just sad.

You are about to have a LOT of free time on your hands Janaye.

Grab one of these. They might help get you sorted out.