What’s a Union for: To protect workers’ rights, or to boss them around?

One CONSERVATIVE member had enough of his group’s double standard… and pushed back.

In an environment practically pulsing with Leftist activism, is he free — as a MEMBER — to express HIS political view? In an organization he pays dues for, should it be required that he share the consensus political opinion? Or is Freedom Of Association still important?

He’s in Social Work. As an industry, it tilts solidly left. And the schooling plays a part in that. We’ve seen a past story of a Social Work Student who took professors to court for penalizing his grades for having conservative political views.

But now Scott David Barrish is calling them out.

He wrote the following letter to the National Association Of Social Workers.

NASW Board of Directors,

I want to bring to your attention an action taken by the NASW Public Relations Manager, Greg Wright.

Over the weekend, I responded to a Facebook post by the NASW regarding the opposition of the appointment and confirmation of US Senator Jeff Sessions for the position of the US Attorney General. In the spirit of respectful discourse, I proffered my opinion in a manner that did not personally attack a single person. However, multiple people replying to my post did in fact engage in ad hominem abusive and ad hominem circumstantial attacks towards me.

At this point, I considered filing an ethics complaint being that the behavior crossed the threshold of violating the NASW Code of Ethics Sections 2.01 and 6.04 by personally attacking me for my political beliefs and who I supported in the previous general election.

This morning I get this Fb Message from Mr. Wright: 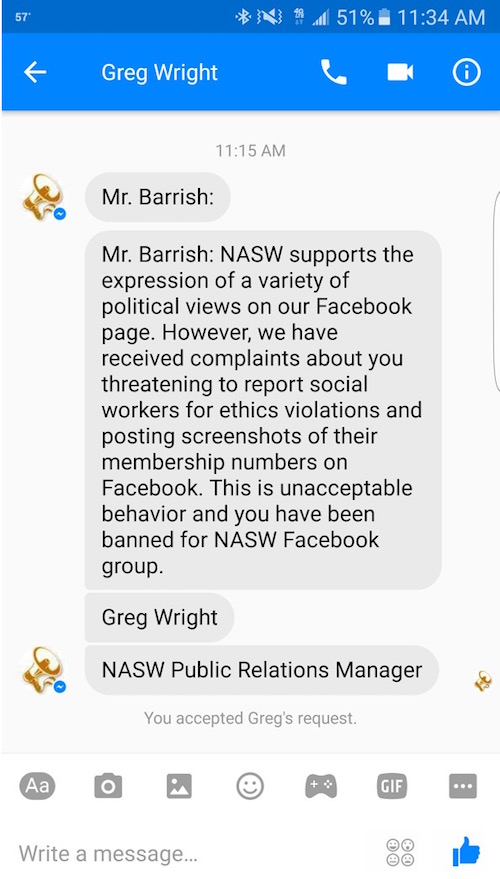 If you were to review the content of the discussion from start to finish, you will notice that at all times I bring up POLICY points and the other respondents bring up emotional personal attacks against me. So, when I remind them that their behavior is not the conduct of that of a social worker as outlined in the NASW Code of Ethics, this is taken as a threat by Mr. Wright’s own words because the other individuals complained. I’m sorry, but if they cry foul based upon their own poor conduct and someone is holding them accountable, that’s just too bad; yet I get punished.

Which brings me to a very salient point. The fact that NASW as an organization via its agent, Mr. Wright, to ban me from the NASW Fb page in being able to espouse my political beliefs and engage in respectful discourse is in fact a violation of its own Code of Ethics by taking punitive action against me for my political beliefs.

“2.01(b) Social workers should avoid unwarranted negative criticism of colleagues in communications with clients or with other professionals. Unwarranted negative criticism may include demeaning comments that refer to colleagues’ level of competence or to individuals’ attributes such as race, ethnicity, national origin, color, sex, sexual orientation, gender identity or expression, age, marital status, political belief, religion, immigration status, and mental or physical disability.”

“6.04(d) Social workers should act to prevent and eliminate domination of, exploitation of, and discrimination against any person, group, or class on the basis of race, ethnicity, national origin, color, sex, sexual orientation, gender identity or expression, age, marital status, political belief, religion, immigration status, or mental or physical disability.”

Now for the request: I am respectfully requesting that the NASW restore my access to the Fb page. I respectfully request an apology from Mr. Wright for his actions on behalf of the NASW in his prejudice shown base on his discrimination against me for my political beliefs.

Consequences for non-action or dishonoring my requests: Having worked on a US Presidential campaign, I have tremendous access to national media outlets. I will not hesitate to expose the hypocrisy of the NASW’s Code of Ethics and how they actually treat conservative members of the profession.

I have given Mr. Wright time to reply to my demands. I have a read receipt of the email I sent to him directly. I will now ask that you consider this matter and I will make a decision by week’s end if I should go to the media or not. I’m taking this matter very seriously. Based solely on your actions or non-action is how I will proceed. The choice is completely yours.

PLEASE FORWARD THIS EMAIL TO THE FOLLOWING MEMBERS:

Missing Board of Driector’s email addresses:

The deadline having passed, he has now made this letter public.

See how the sort of people who endlessly howl with their laundry list of ethical objections to Trump being their President don’t even hold their OWN organization to a minimum ethical standard? Even when SHOWN they had violated their own standards?

No WONDER the group endorsed Hillary… they don’t hold Democrats up to scrutiny.

Leftists howl about ‘minority rights’ about sex, race and Islam but show their true colors — and xenophobia — in how THEY BULLY people with minority opinions within their own group.

We have to be ‘political’ in order to make sure the laws that are written are in favor of what we are working for and who we are working for. Before you take Scott David Barrish’s critique of NASW seriously, look closely at his profile picture. He’s a supporter of Trump. I highly doubt he really cares about what social workers do; if anything, he’s working against us.