Who’s REALLY ‘suppressing’ Press Freedoms? Maybe not who you think.

The ‘REAL’ news has expanded their definitions to allow ‘new media’ that align with their biases.

Huffington Post, for one example, is considered by many as a ‘legitimate’ news source where many of its counterparts on the Right are excoriated as ‘fake’.

The REAL difference is the fact that we ACKNOWLEDGE what our in-house biases are, compared to supposedly neutral sites that display a solidly LEFT-leaning bias.

Want proof? It’s not hard to do.

No. It was spiked because it portrayed Trump in a positive light.

In fact, the author of that story wrote a follow-up elsewhere titled: “Frightening power abuse by Huffington Post”

Think about it. A story that one of their writers took the time to research, compile, compose and post was submitted.

An editor reworked the headline.

Someone paired it with a photo.

And then that same story… was AXED.

Becuase it conflicted with their Editorial Bias.

(Thanks to Google Cache, it still exists.)

What was so horrible that they had to pull it? Here it is:

Sweden has huge problems because of liberal immigration policy

Many journalists around the world are eager to condemn Donald Trump no matter what. When he tweeted about immigration in Sweden few days ago, the social media exploded. Most of the opponent said that Trump had made up the immigration problem Sweden are having. They are wrong.

Only hours later there was a riot of violence and destructions by immigrants in the capitol of Sweden, Stockholm. The police was forced to shoot with ammunition to put and end to it. In Malmö, another city south in Sweden they have struggle with gang violence and lawlessness for years. So when Trump talk about that Sweden have an immigration problem he is actually spot on.

It’s well known for Scandinavians and other Europeans that liberal immigration comes with drugs, rapes, gang wars, robbery and violence. Additional to that we see the respective nations cultures fading away, for good and for bad.

ut the immigration problem is not only a Swedish predicament. The truth is, that several European cities have huge immigration problems where even the police force is afraid to interfere in some locations in these cities. UK, France and several other European countries are changing rapidly with extreme quantity of immigration. I’m not saying immigration is only bad, but a lot of problems come with poor immigration policy, as consequences we get violence, terror and gangs. The fact is that the press here in Europe hasn’t doing their job properly. There is this fear for journalists to not report the basic truth – which is that Europe has enormous problems that comes from liberal immigration politics, and as we also now can see in Sweden, but also here in Norway. But it’s not political correct for journalists to say or write that immigration in Europe is unsuccessful. When that said, most of the people that come from other countries are behaving flawless and are a gift to our society, but then again to report that everything is all good is simply wrong and these journalists should find another job, because they do not have enough integrity that requires to be decent journalist.

Is the writer some kind of a fire-breathing Tea-party America-First Trumpian? (With ‘racism’ being implied.)

Nope. The writer is from Norway.

René Zografos is one of Norway’s most well known journalists and authors. Half Norwegian, half Greek, Zografos is also an accomplished photographer and musician, and has worked for magazines and newspapers, as well as for artists, designers, publishing houses around the world. Genuinely interested in everyday people’s opinions, he decided to spend seven years traveling the world to hear them out about the one and only “greatest country on earth” – America. Visit renezografos.com

Legal Insurrection (the site that outed Huffpo for burying the story), has made a few other observations about Huffpo’s ‘objectivity’.

Af first, it refused to cover his primary campaign in the Politics section, putting coverage instead in the Entertainment section. Of course, the joke was on HuffPo, since that move proved it wasn’t a serious news organization.

Then, HuffPo added a “disclaimer” to the end of each column about Trump: “Note to our readers: Donald Trump is a serial liar, rampant xenophobe, racist, birther and bully who has repeatedly pledged to ban all Muslims — 1.6 billion members of an entire religion — from entering the U.S.”

That didn’t stop Trump from winning the presidency.

How far will HuffPo go to hurt Trump? Far enough to delete a post that credited Trump with being right in his comments about Sweden having problems due to mass immigration and migration.

The media falsely claimed Trump’s comment was about a non-existent terrorist attack the night before, when in fact it was a general comment about Sweden’s problems. Trump’s statements were followed just days later with an immigrant riot in Sweden, bearing out his warning.

An author at HuffPo wrote a post, “Trump is Absolutely Right About Sweden.” It was a huge hit, shared almost 10,000 times while it was live:

Unlike @zokrates article in @HuffingtonPost why not actually look at statistics when making assertions https://t.co/a5udDI4D9p #fakenews https://t.co/2JBNvvHYiz 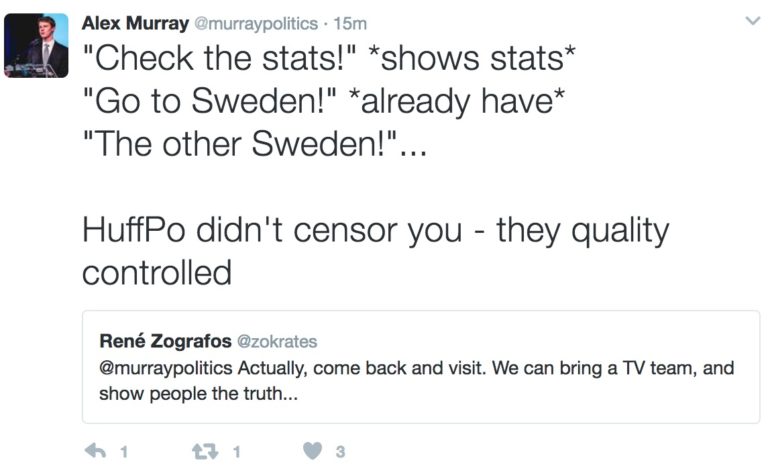 If you want to see the original author’s REPLY to Huffpo’s claims of factual errors, and their reasons for pulling his story, you can find it here:

Spoiler, it uses THIS great quote: “The highest mode of corruption is the abuse of power.”