We have it here. An EXCLUSIVE photo of President Trump doing the thing that Liberals have been screaming about. What will it mean for the rest of his term in office? 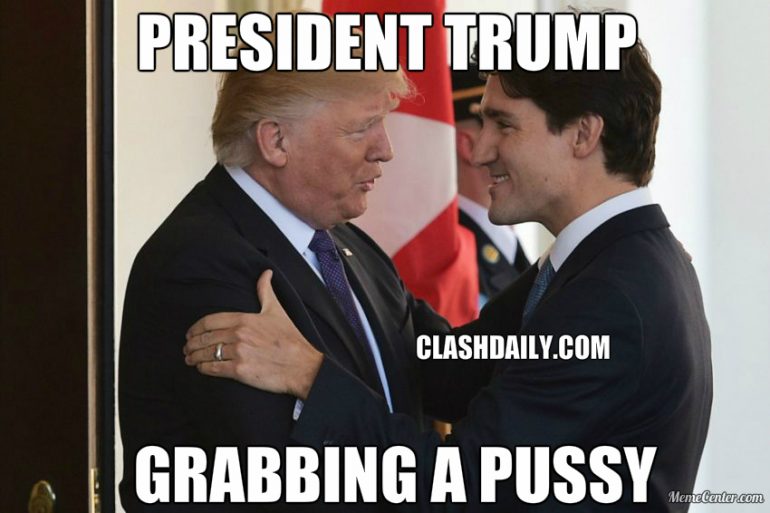 I can hardly look at it!

Yes, that is President Trump with Prime Minister Trudeau of Canada.

And yes, Trudeau is indeed a pussy.

ClashDaily already covered his ridiculous statement after the death of Fidel Castro.

Trudeau ‘virtue signaled’ by making half of his cabinet was women ‘because it’s 2015’.

In the interview below at the 18-minute mark, terrorism is discussed. He believes in fighting terrorism with ‘inclusiveness’ and ‘diversity’.

He won’t attack ISIS even if an attack occurred on Canadian soil.

In an interview with Global News, Trudeau said that he sees no reason to change this new policy towards ISIS and the threat of Islamic terror, even if a terror attack similar to the one in Paris were carried out on Canadian soil.

Trudeau argued that the greatest threat to ISIS is a tremendously open and diverse society in which Muslims and other minorities are fully integrated into mainstream secular society, and that compatibility between extraordinary diversity and a successfully safe society is Canada’s greatest strength and that that is what needs to be highlighted…

…Trudeau said that “Canada is committed to having a military engagement in the fight against ISIL (ISIS) but in a helpful and substantive way. We have made the decision that we will pull out the CF-18’s and ending the bombings that Canada has been involved in, and we will be doing something else.”
Read more: Israel National News

As with any video of Prime Minster Trudeau, you have to listen to every other word because there are a lot of ‘uhs’ in there.

(And if you’re thinking of using his ‘uhs’ as a drinking game, I wouldn’t recommend it. You’ll get alcohol poisoning. Consider yourself warned. Those of you up above the 49th Parallel with the socialized medicine, we’re leaving it up to you.)

Watch the commentary on the possibility of a ‘President Trump’. Prime Minister Trudeau didn’t believe he’d ever have the privilege of shaking hands with a President Trump — he ‘had faith in the American people’.

This is the dufus that Obama and Biden are handing over the baton of Liberalism to?

When’s your next election?