How MUCH do they love President Trump? THIS much!

CNN won’t report on it. (Especially on Don Lemon’s show.)

They won’t want to. It’s really hard to keep that ‘Trump hates minorities’ drumbeat going when the minorities themselves are showing up in YUGE support for his rallies.

Just LOOK at the shirts and signs that were seen all over at his Florida rally over the weekend. 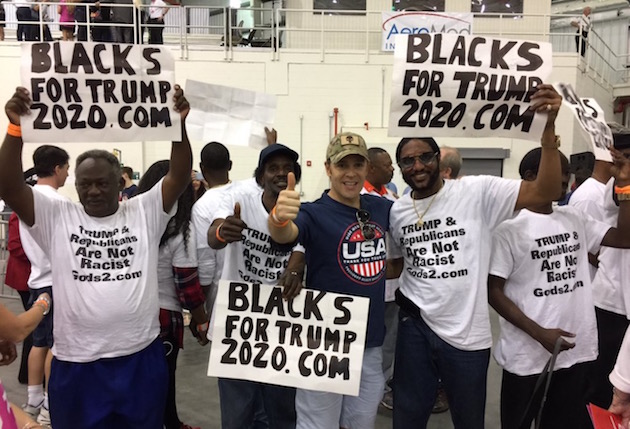 The Trump and Republicans are NOT racist shirts were a nice touch. Do you think CNN will get the message? Nah… they’re more likely to go the other way, ‘objectively’ reporting something like THIS instead:

Hey @Montel_Williams I was in that hanger. Am I a "clueless white person"? Your comment is racist. Shameful & Sad. #TrumpRally #Melbourne pic.twitter.com/1cclJtHfMI

Whoops! There’s Montel Williams being racist against white people. But that’s ENTIRELY ok. Because if there’s ANYTHING I’ve learned from watching the networks, it’s that some people (of certain pigmentation) are only fractionally human.

Lefties are losing their minds ????#TrumpRally

And did you catch what the signs said?

Well if there’s ONE thing these supporters learned from watching the Previous administration, it’s that the Next campaign starts on election day.