DEAR PATRIOTS: Do YOU Think 'Sanctuary Cities' Are Bullcrap?

President Trump has overwhelming support on his ‘Sanctuary Cities’ crackdown.

The vast majority of voters believe that if law enforcement officers arrest an illegal alien for a crime, they should be required to turn the individual over to federal authorities.

And that’s not all that they support.

According to this poll, most of the President’s National Security policy is supported by a majority of Americans.

A survey from Harvard–Harris Poll provided exclusively to The Hill found that 80 percent of voters say local authorities should have to comply with the law by reporting to federal agents the illegal immigrants they come into contact with.

As it stands, hundreds of cities across the nation — many with Democratic mayors or city councils — are refusing to do so.

…The Harvard–Harris Poll survey found strong support for an overhaul of the nation’s immigration laws, with 77 percent saying they support comprehensive immigration reform against only 23 percent who oppose.

“While there is broad support for comprehensive immigration reform, there is overwhelming opposition to sanctuary cities,” said Harvard–Harris co-director Mark Penn. “The public wants honest immigrants treated fairly and those who commit crimes deported and that’s very clear from the data.”…

…A majority — 52 percent — say they support Trump’s two executive orders allowing for the construction of a southern border wall, increasing the number of immigration officers by 10,000 and finding a way to revoke federal funds for sanctuary cities.

The crackdown on sanctuary cities is the most popular feature of those actions, followed closely by the directive to increase the border patrol, which is backed by 75 percent of voters.

The wall is the most divisive element of Trump’s plan, with 53 percent opposing its construction.

…Trump’s new order is expected to target the same seven countries but will not include people who already have a visa to travel to the U.S. It will also exempt green card holders who are citizens of one of the countries in question.

Fifty-six percent say they support the specific aspect of Trump’s order that pauses immigration from the seven countries on the terrorism watch list until a new vetting system is in place.

Support for that policy goes up to 60 percent when the seven nations are described as “Muslim majority countries.”

Voters are worried that the federal judge’s suspension of Trump’s order — a ruling that was upheld this month at an appeals court in San Francisco — could put the nation at risk.
Read more: The Hill 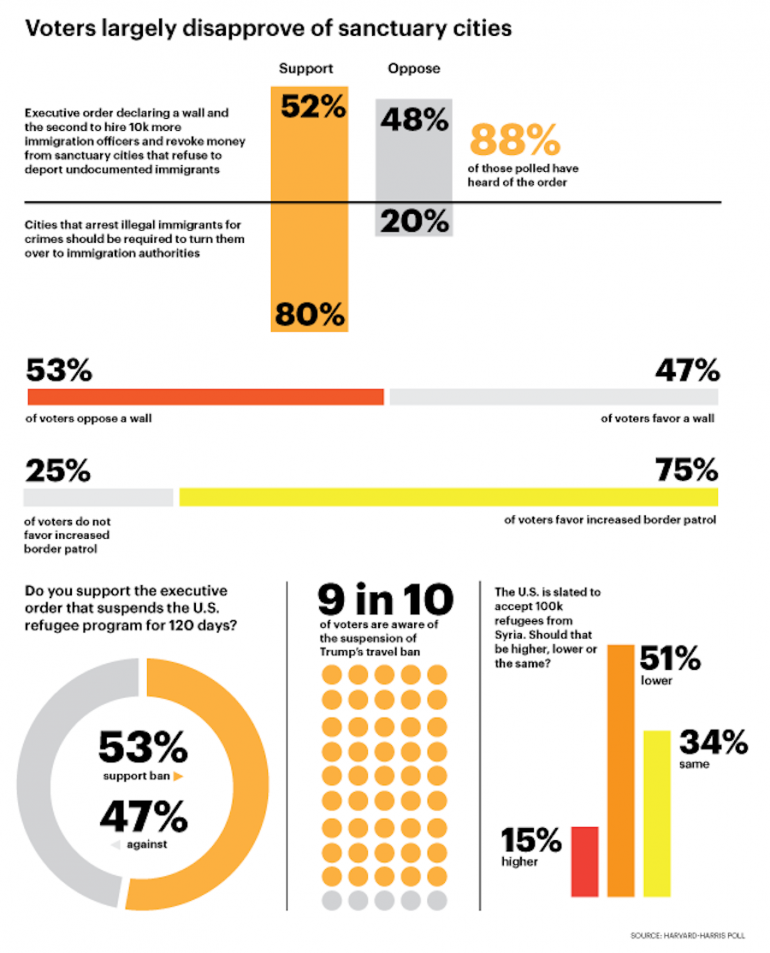 Paging all Democrats that said that President Trump’s policies are ‘far-right’, ‘on the fringe’ and (my favorite) ‘un-American’…

What do you have to say now that Americans are backing the President’s policies?

We tried to tell you that Americans want more secure borders.

This was a YUGE factor in the support for President Trump when he was on the campaign trail.

So, I’ll just leave this here: