Didn’t the NeverTrumpers tell us he was BIG-Government? About that…

President Donald Trump, a new report suggests, is expected to request major cuts from the Environmental Protection Agency’s spending as part of his budget plan that is designed to boost military funding.

The White House will send its budget plans to Cabinet officials Monday, according to Axios. The president, insiders said, is targeting the EPA as part of a first step in his planned “deconstruction of the administrative state.”

Trump is expected to submit his full budget blueprint by March 13, The Associated Press reported last week. He will likely cut climate change and global warming initiatives from the EPA’s budget as part of his stated desire to force the agency to focus more on clean air and water.

The president’s position on climate change is no secret. In January, Trump reportedly ordered political appointees to review all of the data found by scientists at the EPA before it can be cleared for publication. In addition, the White House ordered the agency to remove its webpage on climate change and global warming, according to EPA staffers…

…The cuts to the EPA and increased spending in the military budget would be a step toward Trump’s promised military expansion, including a transition goal to expand the U.S. Navy’s fleet to 350 ships — the largest buildout since the Cold War, bringing with it a $165 billion price tag over 30 years, according to The Hill.

Trump’s military spending requests will require Congress to waive Obama-era military budget caps put in place as part of the sequester in 2013.
Read more: The Blaze

‘Deconstruction of the Administrative state’.

Are there more beautiful words in the English language? 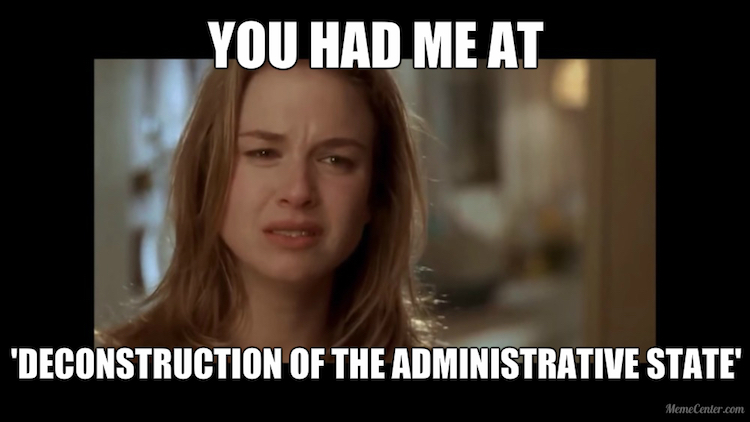 So, what we are seeing, is a SLASHING of red tape…

AND he’s repurposing those funds to restore the military to readiness?

Whatever his alleged ‘Conservative credentials’, with the slashing of regs and red tape, with some of his VERY Conservative appointments, including Gorsuch, and his commitment to School Vouchers?

He’s trending in a MORE Conservative direction than EITHER of our last two Republican Presidents.

And to those doubters who told us Trump would make the Government grow?