Liberal tears. Handy things for manipulating the media. But where were those tears when…

THEY sent men with ‘scary black rifles’ tore a child out of his relatives’ arms after his mother literally gave her life in the effort to take him to the freedom of America.

His family had made the harrowing journey to Florida from Cuba. Several died. Elian survived.

The little boy who was found clinging to an inner tube in the Florida Straits, and became famous playing in the yard of his Miami kin’s home while two countries battled over his fate,

Little Elian? He was returned, by the US government, to Cuba.

..Elian’s relatives in Miami refused to hand him over, and then, in a night-time raid, armed federal agents stormed the home of his uncle and seized the boy. An Associated Press photograph of the terrified child, cowering as an officer in riot gear points an assault rifle at him, inflamed passions even more.

Rioting broke out in Miami as many in the Cuban-American community reacted angrily to the seizure of the boy. 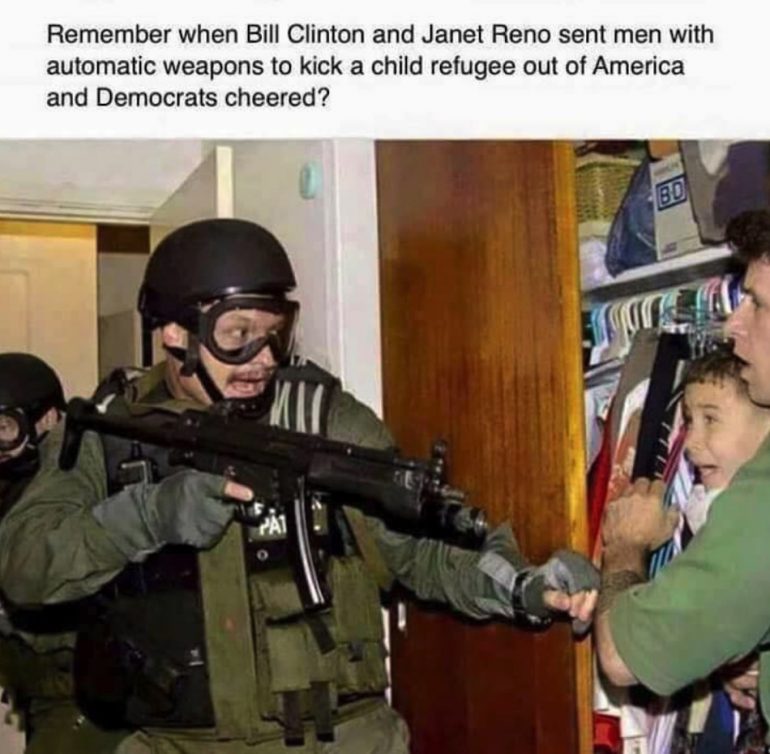 Do you remember the objections his family members offered?

Elian’s Miami relatives argued if the boy went back to Cuba, he would become a brainwashed trophy for Castro in his long-running feud with the U.S.

Now that time has passed, how did the story play out?

At his seventh birthday party, the guest of honor was Cuban leader Fidel Castro. Images of Elian and Castro celebrating were first shown on the island’s state-run TV and then transmitted around the world, to a public still fascinated by the case of the rafter-boy.
“Fidel Castro for me is like a father,” Gonzalez said in an interview with Cuba’s state-run media in 2013. “I don’t profess to have any religion, but if I did my God would be Fidel Castro. He is like a ship that knew to take his crew on the right path.”

Elian became a propaganda cudgel for beating on the American scapegoat.

As we see in today’s news, Pelosi knows a thing or two about THAT tactic.

You’ve taken the wrong side of that issue.

And you’re on the wrong side again today.