Sarah Silverman should really try to engage her brain before she posts ANYTHING on social media.

Do you recall when she said that Hillary deserved 1,000 Purple Hearts?

Did you happen to catch her on Conan dressed as Hitler saying he was tired of being compared to Donald Trump?

And her oh-so-adult reaction to Milo Yiannopoulos writing a book.

And if her career wasn’t classy enough…

The Jewish ‘comedian’ has called for a military coup to stop President Trump. 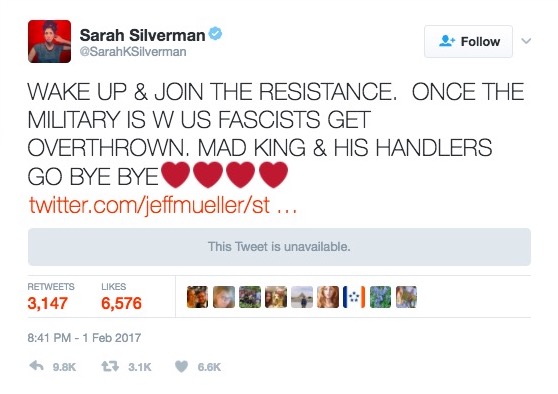 Why would she do such a thing?

Because she’s a complete idiot, that’s why.

(Hey, I’m just going by the evidence provided by her words.)

So… let me get this straight.

She wants to overthrow ‘fascists’ with the military.

Sarah Silverman is obviously no student of History.

Here, let me edit that ALL-CAPS tweet for you because punctuation is your friend:

That is what she meant, right? That the ones plotting the violent rebellion are the fascists?

@SarahKSilverman
BREAKING: Upper class woman tries to send lower class men to die for her, acts as if she'd ever pull a trigger herself

@SarahKSilverman You're *literally* calling for a military coup. Do you think that ends in democracy?

@SarahKSilverman You're fighting for a lost cause, Sarah. You're practically giving Trump a second term, with your incendiary rhetoric.

@cmahar3 @Civis_Silas @SarahKSilverman cuz yeah the military is going to side with the Hollywood useful idiots that vilify them.

@_DWRobinson @SarahKSilverman I'm curious how the side that hates the 2nd Amendment and guns is going to overthrow a sitting President.

The military won't be siding with you. Especially after your president ignored them & the veterans for eight years. @SarahKSilverman pic.twitter.com/TvfE6fbGl0

Can we just stop with the ‘President Trump is a Fascist’?

The fascists are the anti-free speech rioters on the UC Berkley campus stopping a gay conservative from talking about the nonsense of ‘cultural appropriation’.

They’re the ones that use violence to enforce their worldview.

Wanting to kill your political opponents — or have them overthrown by force — is authoritarian and fascistic.

Donald Trump is not a fascist, he is a Republican.

It’s a difference in worldviews, and I know it’s hard for liberals to rub those two brain cells together to understand that.

Courtesy of the brilliance of Thomas Sowell via the genius of Bill Whittle: