Looks like we found that ‘threat to democracy’ Hillary was talking about!

Roll the calendar back to October.

Hillary was confidently coasting to that victory her advisors assured her was only weeks away. She planted her ‘gotcha’ soundbite question in the debates to set up Trump for her next volley of attack ads. Remember that question?

Will you accept the results of the Election?

When Trump answered with something less than an unequivocal ‘YES!’ the trap was sprung. And she attacked him with it:

While Donald Trump is assaulting our democracy, millions of people are standing up for it—registering, voting early, and volunteering.

Sorry, let’s rephrase this. Does anybody ON THE LEFT remember this?

Because they obviously have really short memories.

By November 9th, they had forgotten ALL about that ‘threatening democracy stuff’. Because THEY were the ones contesting the results.

They had their little meltdowns, and riots. Nothing changed.

They tried their little ‘Recount’ Drama. Nothing changed.

They tried to influence the Electoral College. (Some had their lives threatened, which you might even think was illegal if someone not named Obama were President.)

They tried scary videos by vapid celebrities.l Nothing happened.

Every trick and tactic they could imagine was tried. Nothing.

And then he was inaugurated.

So people rioted and busted up the city. But he was still President. Hashtag #NotMyPresident. (Except that he WAS, or they wouldn’t be bitching about it.)

They dressed up in their Clit-head outfits and marched on Washington, making sure everyone knew that their manners were as nasty as their menstural cycle. He was still President.

They left trash in Washington to demonstrate their rage. Trump supporters cleaned it up.

They assaulted Trump supporters (this wasn’t actually a NEW development… it had been happening since he was a finalist in the GOP Primaries).

They shut down some airports with demonstrations. But … guess what? He was STILL President.

So what is a leftist who has been deprived of their access to Authoritarian Control of the Electorate to DO in such a circumstance?

Remember: studies confirmed that Fake News did NOT influence the election…

So a former Obama Official suggests drastic action: OVERTHROW the Duly-Elected President Of The United States Of America.

Translation: We the People were wrong when we voted so better and wiser people must force their will on us for our own good.

For context, she wrote a book: 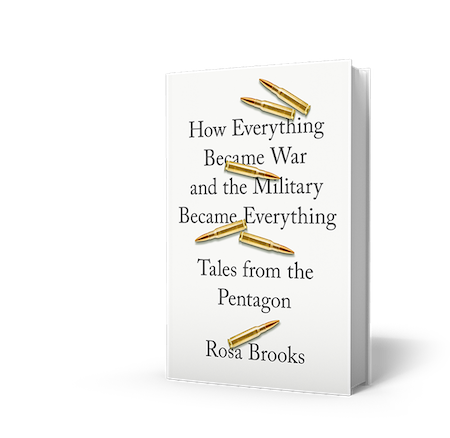 According to Wikipedia she: “is a law professor and the Associate Dean for Graduate Programs at Georgetown University Law Center, a columnist and contributing editor for Foreign Policy and a senior fellow at the New America Foundation”

Translation: for what she is about to say, if she were not horsewhipped by her own poisoned ideology, she knows better — or ought to.

In a blog post for Foreign Policy magazine, Rosa Brooks, a former Obama administration official, outlined four ways to “get rid” of President Trump, including declaring him mentally unfit for command or carrying out a military coup.
Brooks is a Schwartz senior fellow at the New America Foundation, which is funded by billionaire George Soros’s Open Society Foundations. She served from 2009-2011 as Counselor to the Under Secretary of Defense for Policy and served as a senior adviser at Obama’s State Department.

Her posting is titled “3 Ways to Get Rid of President Trump Before 2020,” although the piece actually outlines four ways.

Brooks listed four ways to get rid of a “crummy” president.

Elect him out of office after his four-year term. “But after such a catastrophic first week, four years seems like a long time to wait,” she wrote.
Impeachment. However, she lamented, “impeachments take time: months, if not longer — even with an enthusiastic Congress. And when you have a lunatic controlling the nuclear codes, even a few months seems like a perilously long time to wait.”
Utilizing a claim of mental instability to invoke the 25th Amendment of the Constitution, which sets the path for the commander-in-chief’s removal if the “president is unable to discharge the powers and duties of his office.”
A military coup. She writes: “The fourth possibility is one that until recently I would have said was unthinkable in the United States of America: a military coup, or at least a refusal by military leaders to obey certain orders.” –Breitbart

There we have it: Rosa Brooks, a former Obama advisor, was openly calling for turning America into a Miltary Junta. Becuase We the People voted ‘wrong’.

The Soros connection is more than coincidence. He is a globalist of the highest order, and America, with its emphasis on Independence, is globalism’s biggest hurdle..

Someone with Soros connections… calling for a military coup. Will this finally be enough of a smoking gun to open up a federal investigation into Soros?