Should we REALLY believe McCain is defending ‘American interests’ or is he — like that swamp that needs draining — just looking out for number one?

If nothing else, does he REALLY deserve to have an (R) after his name? He does more consistent harm to the party than a typical Democrat. And he speaks more like a Democrat than a Republican on most days, too.

Here’s John on ‘Meet The Press’

“I hate the press,” the Arizona Republican sarcastically told NBC News’ Chuck Todd on “Meet the Press.” “I hate you especially. But the fact is we need you. We need a free press. We must have it. It’s vital.”

But he continued, “If you want to preserve — I’m very serious now — if you want to preserve democracy as we know it, you have to have a free and many times adversarial press,” McCain said in the interview. “And without it, I am afraid that we would lose so much of our individual liberties over time. That’s how dictators get started.”

The same ‘Republican’ that passed the infamous fake dossier accusing Trump of cavorting with Russian Prostitutes to the Feds, that is a Democrat in GOP clothing, who only seems able to find his testicular fortitude when it’s time to criticize a Republican (where where you when Obama was running around like a petty tyrant, and Hillary was flaunting the law? Were you too busy collecting Soros bucks to notice?)

Dictators get started when they exceed the boundaries allowed them by the Constitution. You know, like passing Obamacare, or using the IRS to hurt your political foes, or secret meetings on an airline tarmac where a promise of employment is given for NOT prosecuting a crime.

Is this just sour grapes because a political OUTSIDER could win in a race where McCain got SPANKED? Probably.

But before you get TOO excited with calling him a ‘dictator’, let’s look at what you’re saying about the press.

What does a press that isn’t free REALLY look like?

Something like this: Four American journalists arrested in Bahrain while covering anniversary of Arab Spring protests

That, or the entire Shutdown in Turkey. Or the internet suppression in China. You get the idea.

Has CNN’s Don Lemon been arrested? No. Not even for being drunk and disorderly on live TV.

Nope. They’re not being suppressed.

Are secret police breaking down their doors, and smashing their presses or broadcasting equipment?

Again, no. No suppression there.

What is Trump doing? He is CRITICIZING the press. Calling them out for their biases. Biases easily proven by their slanted reporting of issues… their percentage in financial support of Hillary’s campaign… and he is stripping them of favored status.

They’ll have to WORK to get a scoop, instead of getting the plum seat on the junkets.

The poor dears. They’re so suppressed.

And John? You should really start to think about the constituency the elected you. The REPUBLICAN constituency… rather than the buddies you glad-hand with in those Washington backrooms.

You’ll find that a lot of those Old Guard are unceremoniously on their way out. Like that ‘Shadow Government‘ that just got sent packing.

It’s time to man up and start defending Principles, rather than political expedients. You did nothing memorable to oppose Obama but often offered olive branches. And you start offering opposition NOW? 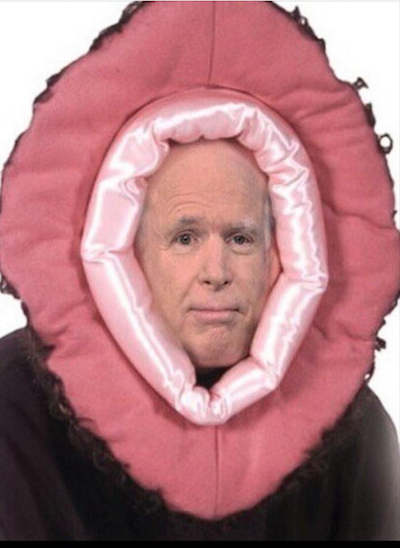 Is this just butthurt and envy talking? Don’t be such a priss.