Is there anything that the Medi (D) won’t trounce the Trump administration for? This time they’re really grasping at straws…

Despite being the first successful female Presidential Campaign Manager in the history of the United States, Kellyanne gets a lot of hate.

You’d think the feminists would be applauding her on her success.

It’s because she’s conservative and that’s just not permitted.

And if you’re not a ‘liberal’ woman, well then, you’re just an idiot.

(What is the term for women who are an ‘Uncle Tom’ to ‘misogynists’, anyway?)

Kellyanne Conway can’t even sit without being roasted in the Media (D).

Here is what caused all the outrage: 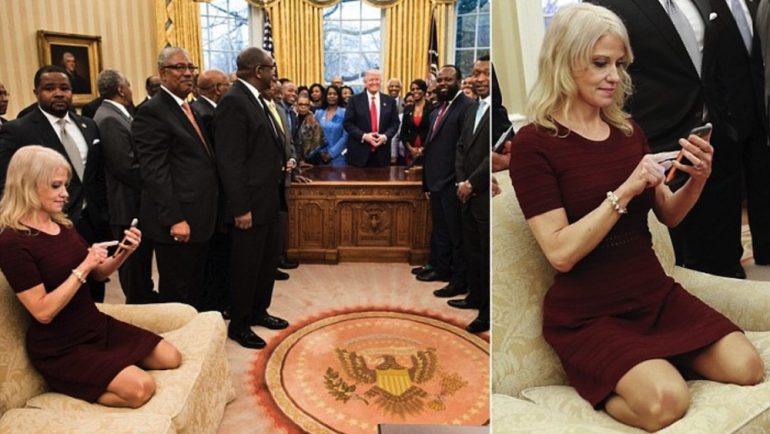 Kellyanne Conway has been caught on camera kneeling on a couch in the Oval Office with her high heels on, while President Donald Trump posed for a photograph with the leaders from some of the country’s historically black colleges and universities.

The White House adviser has come under fierce criticism on Twitter with many calling her out for how disrespectful the pose is.

At one point, with her heels digging into the delicate fabric of the couch, Conway is seen to be texting on her phone while President Trump met with his invited guests.

Moments after taking a photo herself, she was seen checking her phone, with her legs tucked beneath her.
Users on Twitter were quick to mock the adviser’s own ill-advised pose with many shocked at the lack of formality displayed in such a formal setting.

A number of online commentators noted how casual Conway’s pose appeared to be, considering the administration was making an effort to reach out to the black community.

‘Shocking and bizarre. How do you get that comfortable in your boss’s office? Especially in front of guests? Just when you think this administration couldn’t shock you anymore…’ wrote one user, while another thought the pose was more appropriate for someone at home: ‘I sit on my couch like that. Only when I’m watching tv & having the Munchies tho.’
Read more: Daily Mail

Well, that’s really something to be outraged about!

Not Obama’s 2 full terms at war — some of which was illegal.

Not Obama and Hillary leaving a vacuum in Syria for ISIS to form there.

Not Obama spying on the Press.

Not the frightening government overreach and ever-expanding regulations over the past 8 years.

Not the pushing of transgender bathrooms by the Obama administration.

Not drone strikes on Americans by the US government under Obama.

Feet on a couch.

And if you believe that, you need to read this: