Franklin Graham is no wallflower. He doesn’t shy away from the truth. And he doesn’t care about political correctness.

ClashDaily reported that one of Dubya’s daughters was going to speak at a Planned Parenthood fundraiser.

Graham took to social media to call out Barbara Pierce Bush on fundraising for Planned Parenthood. 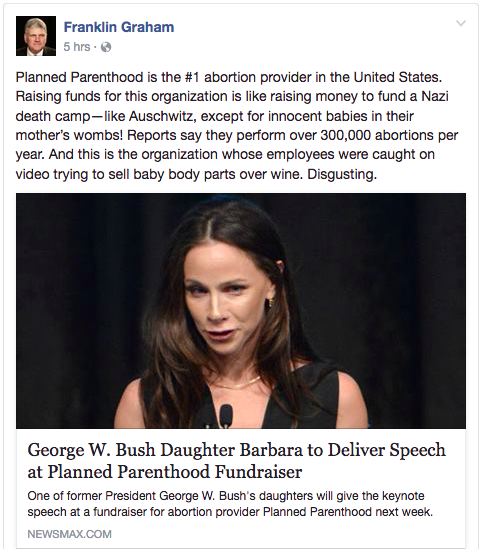 Those are some harsh words.

People often wonder how so many in Germany could have allowed and even cheered on Nazis with their hate.

But now, you have women who are aggressively pushing for abortion on demand with no limits.

The mantra used to be ‘safe, legal, and rare’.

That is an atrocity.

Millions of innocents are slaughtered annually because of ‘convenience’.

Former Planned Parenthood employees talk about quotas for abortions and the incentives that the office would get for meeting those quotas.

This is the incrementalism of the Left at play.

The Left is notorious for moving the goal posts.

This is why they don’t want to discuss any limits on abortion.

If a Republican dares to try, then there are protests with placards featuring coat-hangers and signs that say conservatives hate women.

The uncomfortable fact for lefties is that time and again, in poll after poll, the majority of Americans say they want some restrictions on abortion. Even the pro-choice ones.

Barbara Pierce Bush is fundraising for the extreme left fringe group that is happy to murder babies.

And she just got called out by Franklin Graham.

Do You Agree With Franklin Graham About Fundraising For Planned Parenthood?