Another ‘tolerant Liberal’ goes off-script. Thank you, to all the crazy, racist, sexist Libtards for showing the world who you REALLY are.

The Mayor of Warren, Michigan, Jim Fouts (D), has found himself in hot water over some audio recordings.

Fouts vehemently denies that the tapes are authentic, but one has already cost him his weekly radio show on 910AM Radio Superstation. He alleges that a political opponent has fabricated the tapes to slander him.

Listen to the audio that cost him his radio job.

He was allagedly making ‘repulsive remarks’ about the disabled:

After the release of the audio that cost him his radio gig, more tapes surfaced.

And these were (shockingly) much worse.

Listen to the ‘chimpanzee’ remarks:

Listen to him use the ‘N’ word:

Listen to his comments on women:

Listen to more of his comments on women:

With his rugged good looks, he must be a real ladies man. 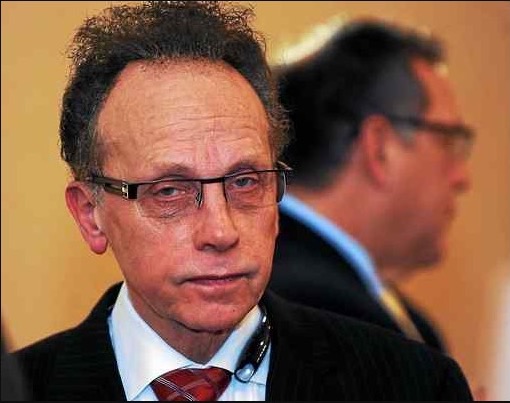 C’mon ladies! I bet you just can’t handle all that sexy! Those bedroom eyes are almost looking in the same direction!

Here is the ‘unofficial’ ClashDaily reaction:

We can’t even soften the I-just-vomited-in-my-mouth gif with, ‘At least he’s got a great personality and a sense of humor.’

Because — if the allegations are true — No, he doesn’t.

We don’t seem to be dealing with a reverse Dorian Gray.

It would appear that in the case of Jim Fouts, the ‘inside’ matches the ‘outside’.

A former employee of Mayor Fouts isn’t surprised at the allegations at all.

An ex-aide to the mayor of Detroit’s largest suburb has said it’s no surprise that his former employer has been accused of making racist remarks on tape.

Joe DiSano, a white man who worked for Warren mayor Jim Fouts from 2003-2013, says his then-boss would frequently ‘casually’ make racist remarks in front of him.

‘At one of the last meetings I ever had with him, he actually stood at the front of the conference room table and danced around like he was monkey,’ DiSano told The Detroit Free Press. ‘And that was in reference to voters in Detroit.’
Read more: Daily Mail