Liberals are bathroom obsessed. Wasn’t it just a few months ago the number one issue in America – at least according to the mainstream media – was HB2?

Forgotten about HB2? It was the North Carolina law that ignited a coast to coast maelstrom over whether people with dangly dangly things between their legs had to use the Men’s room and those with slits between theirs had to use the Women’s room. You see, apparently some fraction of a percentage of the population might have mistaken their dangly dangly for a slit or vice versa, or they have something other than a dangly dangly or a slit, so from sea to shining sea it was necessary to enter the Twilight Zone and pretend that gender dysphoria patients were akin to Rosa Parks and that the transgendered were dying in the streets for lack of a public toilet. Or lack of a bush to relieve one’s self behind.

Somehow it is fitting that liberals obsess over sterile rooms walled in tile. They all should be in an asylum. Tiled, sterile rooms are probably as close to an asylum as most of them will get and that’s unfortunate.

Anyway, what about the bathrooms at a public school in extremely liberal Rockville, Maryland which is part of Montgomery County, Maryland. Montgomery County is an east coast version of Eugene, Oregon, Boulder, Colorado, or Berkeley, California. Only it’s a lot richer. Because the vast majority of Montgomery County residents work in high-ranking federal government positions in adjacent Washington, DC supporting the deep state.

Remember those stories a few weeks ago about EPA and other federal executives worried about their prospects in the face of possible budget cuts under Trump? (Even though the Defense Department budget is expected to grow.) Guess where a bunch of them commute into DC from in cars that cost more per month than the rent does for those ghetto tenements where all those black people liberals pretend to care about live?

Places like Montgomery County where a fourteen-year-old girl was brutally raped in a public school bathroom by, wait for it, wait for it, a couple of dudes that weren’t supposed to be in the United States in the first place!

(If the Kate Steinle reference is unfamiliar to you that means you are probably still tuned into a certain TV network that recently featured a Doogie Howser lookalike pulling a Geraldo-at-Al-Capone’s-vault moment and making a total assclown of herself in the process.)

Yes, Rockville is a sanctuary city. Like San Francisco where Kate Steinle was murdered by one of those dreamers who was deported who knows how many times but somehow struggled his way across the border one more time to add homicide to his rap sheet. It’s not like Rockville suddenly, out of nowhere, became a sanctuary city.

Julie Pakalovich Carr is the well-heeled activist that helped Rockville became the kind of bedroom community where six-figure-earning, deep-state acolytes send their fourteen-year-old daughters to public school and then receive that phone call every parent dreads informing them that something bad, very, very bad, has happened to their child. Julie Pakalovich Carr introduced the text that eventually became Rockville’s sanctuary city law.

Carr is a typical Montgomery County liberal. Her parents make more money off the gubmint teet each year than all the illegals living the shadows make doing jobs Americans won’t do. She’s essentially been an activist since birth. (One wonders if she popped from the womb and launched into some shrill tirade about her mom’s slit. Or the fact that a dangly dangly had something to do with her presence in this world. Or that her mom made a pro-life decision after the tests popped positive …” keep your hands of my mom’s uterus” and all that.) A glowing item in regional media a few years back heralded Julie as Rockville’s youngest ever city councilwoman and included an oh-so-cutesy story from mom about how as a kid Julie once stuck notes in mailboxes about saving the bees or whatever. As the story explained, Julie was always an activist. Couldn’t be anything but, and definitely couldn’t get off her rear end to endorse sensible public policies.

Oh yeah, #Resist rallies. Remember a few weeks ago when a whole bunch of largely white people descended into 97% black (little known fact, outside working hours Washington, DC’s demographic is almost 100% black) Washington, DC to hear Ashely Judd talk about being a nasty woman, Madonna threaten to bomb the White House (anyone seen Madonna lately? didn’t someone recently approach the White House gates claiming to have a bomb in their car?), dress up as slits, and then hold their day without women? A whole bunch of them came into DC from Montgomery County. 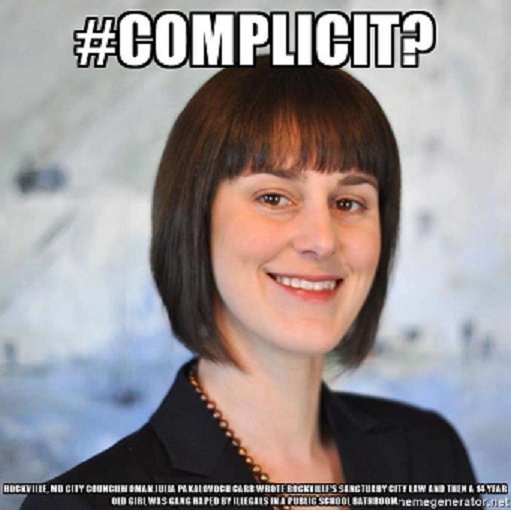 Carr and the #Resist people are quick to hoist up signs claiming “we are all illegals” or “we are all Muslims” and so forth.

Not a damned one of them has the courage to hoist up a sign In solidarity with the fourteen-year-old THEY gang raped. Or with the Kate Steinle’s THEY have killed.

They won’t hold a day with those women, honoring their lives and reflecting upon the circumstances that made those women them victims.

The left is #Complicit. Period. End of story.

They were in effect participants in the gang rape of a fourteen-year-old girl in a Montgomery County public school bathroom. They might as well have pulled the trigger that killed Kate Steinle. Their guilt is that of association via the policies they support and it’s time they paid for it.

If we on the right mobilized outside Rockville city hall half as well as the HB2 snowflakes did, imagine the impact. We would destroy their snowflake safe space world. And we should.