Wow. She’s got the looks of her mother and the brains of… her mother.

One almost feels sorry for her.

The cover of the 2017 Lincoln Day Dinner program for Republican Party of Palm Beach County tonight at Mar-a-Lago. @WPTV pic.twitter.com/SJPlB8V6qb 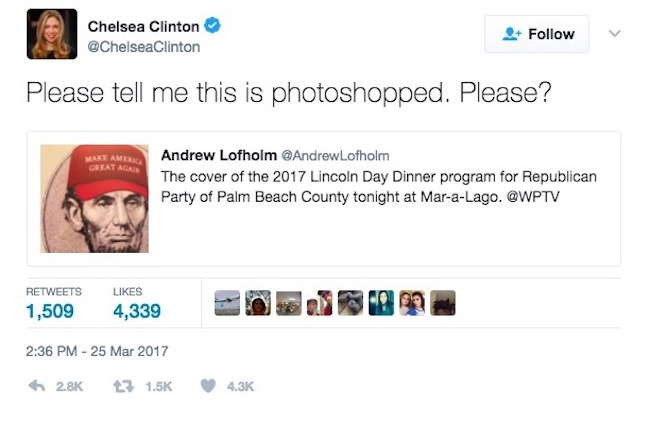 You can see where this is going to go, right?’

A number of people verified the authenticity of Licoln wearing the MAGA hat:

@ChelseaClinton Nope Lincoln was wearing that exact hat at the Theater

@ChelseaClinton Nope, they found a picture of Lincoln wearing a MAGA hat from the nineteenth century. No photoshop needed.

@ChelseaClinton I remember this photo was taken at the 1856 Republican National Convention and. is real.

@ChelseaClinton Lincoln just got off his unicorn and just when the Bosnian sniper fire started, he put the hat on.

Others went a different direction:

@ChelseaClinton Not Photoshopped, he started wearing that hat right after he won his WWE title. pic.twitter.com/ZlKZHTvRzN

@ChelseaClinton Oh shit! I think you're onto something… pic.twitter.com/BOZDlfat6d

.@ChelseaClinton Not a photoshop, and neither is this one: pic.twitter.com/J9NX1igZeh

#ProTipsFromQ: Sometimes 'Shopped pics are hard to spot. @ChelseaClinton This one is fake. The Delaware is deeper than a T-Rex's knees. pic.twitter.com/bcrTPrlLz4

@ChelseaClinton It's as real as those Bosnian snipers.

. @ChelseaClinton Please tell me this is photoshopped. Please? pic.twitter.com/8bLTuh23PU

@ChelseaClinton Please tell me you're not that stupid. Please?
You're just BEGGING for mockery with a tweet like this.

Chelsea did try to ‘explain’ her tweet by saying that her tweet was ‘too subtle’ for the knuckle-dragging Trump-supporters. It didn’t go over well.

Clearly the sarcasm directed at the #MAGA rewriting of history was…too subtle? (And Photoshop created in 1988) https://t.co/GmZ2QnQSJK

Finally, someone to make Joe Biden’s stupidity look like it falls within one standard deviation.

Ouch this is bad.