What happens when a Muslim teacher rips on Christianity and a Christian student stands up for the faith?

The student gets suspended.

Check out what happened to 20-year old Marshall Polston when he confronted his Middle Eastern Humanities professor, Areej Zufari, for her comments that were decidedly anti-Christian.

Polston is a Sophmore majoring in International Relations at Rollins College, a private Liberal Arts college near Orlando, Florida.

‘A student’s freedom of speech and expression are the cornerstones of liberty in a free society,’ attorney Kenneth Lewis said in a statement, while also calling for a ‘full inquiry’ into the actions of Professor Areej Zufari.

College President Grant Cornwell refused to comment on specifics of the hearing, but said that he, the trustees and deans at the school had received some 10,000 emails about Poston’s suspension, which quickly gained traction on conservative media sites.

He said most of the emails were ‘filled with hatred and violent imagery,’ he said.

Meanwhile, Professor Zufari’s sister has spoken out, saying she is anxious to get back to school.

‘With the rise of fake news, it’s an unfortunately sensationalized situation that spiraled out of control,’ Noor Zufari said. ‘The silver lining is Areej can continue her passion of education … She is looking forward to getting back to her regular class schedule and being able to teach again.’

So, it’s a ‘Fake News’ story that ‘spiraled out of control’?

It’s a bit of a He Said, She Said situation, so let’s look at what they were both saying.

According to an email the professor wrote to the school in February, she says Polston disrupted the first two classes with ‘antagonizing interjections, contradicting me and monopolizing class time‘.

‘His attitude is contemptuous,’ she said.

As a Christian, Polston said that Zufari’s unorthodox lectures were unsettling.

In an interview with the Central Florida Post, Polston said that Zufari claimed Jesus’ crucifixion was a hoax and that his disciples didn’t believe he is ‘God’.

‘It was very off-putting and flat out odd,’ he said. ‘I’ve traveled the Middle East, lectured at the Salahaddin University, and immersed myself in Muslim culture for many years. Honestly, it reminded me of some of the more radical groups I researched when abroad.‘

‘Whether religious or not, I believe even those with limited knowledge of Christianity can agree that according to the text, Jesus was crucified and his followers did believe he was divine … that he was “God”. Regardless, to assert the contrary as academic fact is not supported by the evidence,‘ he added to The College Fix.

Zufari then gave Polston a 52% on his first essay. Polston, a Straight-A student was shocked and upset. He sent her a lengthy email the next day that Zufari found hostile.

‘Since you’ve decided to carry a blitzkrieg out against me, I may have to speak up in regards to your extreme bias and not necessarily to the class but to the dean,’ Polston said.

‘Quite frankly the grade you assigned to me exposes your true agenda which is to silence me in class.’ the email said. ‘You’re one of the most incompetent professors I have ever seen in my life.’

And that’s when this happened:

Zufari was so concerned about his reaction that she canceled class the next day — and had an Associate Dean go to class to inform the students. The Dean ran into Polston and discussed the issues he was having with Zufari. The Dean wrote a letter to the school’s Assistant Vice President because she was concerned about ‘safety’ as Polston ‘referenced guns’ several times, though she gives no context for the comments.

‘At no point did he threaten anyone openly, but I was very uncomfortable by his continued reference to guns, generalized categories of people by religion and his obvious nervousness and disdain for the professor,’ she wrote.

It was just a few days later that Zufari contacted the ACLU in Florida (via Facebook) to ask for help. 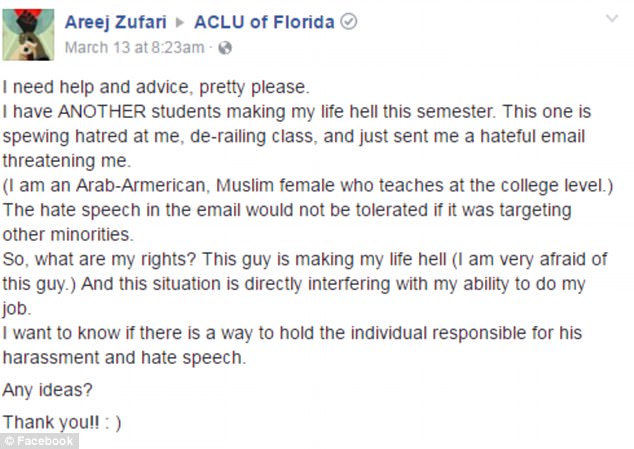 Maybe it’s in the curriculum, but… that was probably a bad choice.

Polston says that during the class Zufari failed to punish a student, who is Muslim, when he made a hateful comment about gays.

‘He stated that a good punishment for gays, adulterers, and thieves was the removal of a certain body part, as determined by Sharia law. It took a few seconds for me to realize that he actually said that, especially after what this community has faced with the tragic loss of life at Pulse,’ Polston said.

Polston said that all Zufari did was tell the student he was ‘in time-out’ – despite calls from others in the class to report his behavior.

Polston said that the pro-Sharia comments were so bad that one student contacted the FBI about the student.

After the class, Polston says that it wasn’t the Muslim student – but himself – who Zuafri reported to the Dean of Safety.

‘They made it clear that they had not gotten a report about what the student said, and were more concerned about the danger I was causing to the campus.

‘What danger? A difference of opinion in a college classroom is nothing out of the ordinary and certainly not dangerous. It was surreal and degrading.

‘The bad grade was upsetting, but they were literally refusing to acknowledge the dangers posed by someone who advocated chopping off body parts on campus,’ Polston said.
Read more: Daily Mail

Polston was told that he was banned from the class.

Then Zufari accused Polston of stalking her, and another student said that Polston was staring into the classroom at 7:36 pm on March 23. This led to a police report filed by Zufari, and Polston’s official Suspension on March 24. 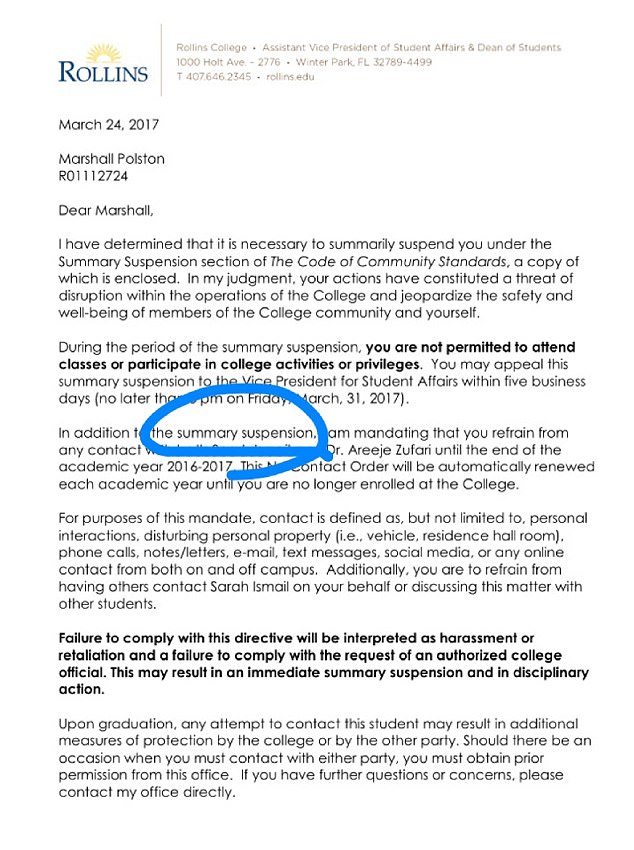 Polston provided a surveillance photo of him eating at a Chipotle 30 to 40 minute drive away, time-stamped just before 7pm.

Marshall Polston’s suspension has been lifted and he is able to return to class.

This is why we need to make sure that Free Speech is preserved — it is the cornerstone of Western values.

We need to make sure that students that disagree with professors aren’t shut down like Polston was.

And — just as an aside — if you do write to a college in support of a Christian or a conservative student standing up to the ultra-Leftist authoritarian crap-sandwich that is academia, don’t threaten violence.

It just hurts the cause.